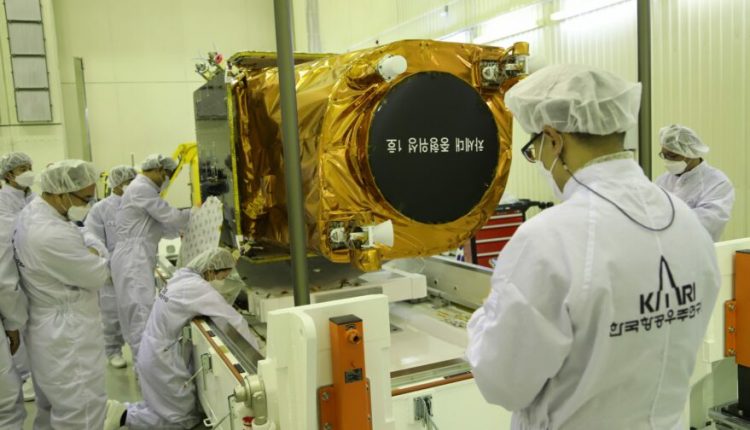 SEOUL, South Korea — The March 22 launch of South Korea’s CAS500-1 remote sensing satellite has marked the beginning of the country’s journey toward the domestic satellite industry being driven by the private sector.

To that end, the state-funded Korea Aerospace Research Institute (KARI) jointly developed the 500-kilogram satellite with a group of selected industry partners from 2015, sharing its core technologies and information with the latter from the get-go, the first case of this kind, according to a KARI document.

With inherited assets, Korea Aerospace Industries (KAI), the nation’s biggest private aerospace company, is leading the development of another 500-kilogram-class Earth observation satellite, CAS500-2, under KARI’s guidance. The satellite is slated to be sent into orbit during the first half of 2022 on a Russian Soyuz-2 rocket, concluding a two-part launch agreement KARI and KAI signed with GK Launch Services in 2017.

If the transition goes as planned, KARI will take its hands off the development of 500-kilogram-class spacecraft by 2025 at the latest, and shift its focus to satellites in other categories that still requires the government’s support, the document showed.

“The way we developed CAS500-1 provided a watershed moment opening up a new chapter for the domestic satellite industry,” said Lee Seung-hoon, chief of KARI’s Satellite Research Directorate. “The industry will evolve in a way that the private sector leads the development [of satellites], which used to be done by the government, with Indigenous or localized technologies.”

The Ministry of Science and ICT plans to assist the transition by spending 20 billion won ($17.7 million) over the next five years on “building infrastructure for satellite development and  boosting exports to countries in Southeast Asia, Middle East and Latin America,” according to a space policy report issued in December by the state-run Science & Technology Policy Institute (STEPI). The ministry also plans to host international forums and training programs for invited overseas space scientists and engineers to increase demand for made-in-Korea satellites, the report said.

“There is still a long way to go for Korea to stand out in the global satellite industry. Nevertheless, this is the meaningful first step in the right direction,” said An Hyoung-joon, a research fellow at STEPI who co-authored the report.

Experts said KAI would benefit most from the transition because it’s the government’s handpicked successor to KARI. And there would be a group of secondary beneficiaries: smaller suppliers with a proven track record.

The most likely candidates to join the group are those involved in the CAS500-1 development, said Oh Yo-han, a senior administrator at KARI’s media cooperation division.

The satellite — which is flying in its target orbit of between 484 and 508 kilometers above Earth doing on-orbit testing — was designed to operate from a sun-synchronous orbit to monitor farms, forests and water resources with an electro-optical payload capable of providing panchromatic and multispectral imagery with sharp enough resolution to distinguish objects as small as a half-meter across.

In a pre-launch statement, KARI identified companies which had played what Oh called a “key role” in developing CAS500-1:

“KARI selected them through an open competition with two key criteria in place: technological capability and price,” Oh said. He said each new project is supposed to be proceeding with newly selected suppliers, but chances are high that companies with heritage with satellite development will make a deal.

“The more heritage, the higher the change to make a deal. That’s the way the space industry works,” Oh said.

NASA Recommendations for the Biden Administration