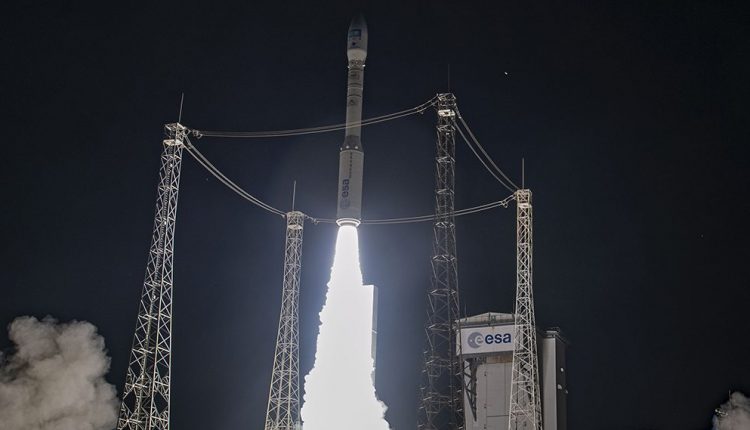 TAMPA, Fla. — Europe’s small launch vehicle Vega returned to flight April 28, carrying a next-generation imaging satellite for Airbus Defence and Space that has been held back by multiple delays.

Pleiades Neo 3, the first high-resolution 30-centimeter satellite in a new constellation built and operated by Airbus, was released from the rocket in a mission that lasted one hour and 42 minutes following takeoff.

An independent investigation pinned the failure on cables that were improperly connected in the upper stage of the rocket, which Italian rocket maker Avio builds.

The need to review that failure added about two more months of delay for the first satellite in Airbus’ Pleiades Neo constellation.

The inaugural spacecraft had been slated to launch on the upgraded Vega C rocket in 2020.

However, Airbus shifted gears after the debut flight for Vega C was pushed into mid-2021, following a separate Vega launch failure in July 2019. That failure destroyed the FalconEye1 imaging satellite for the United Arab Emirates and was blamed on a structural failure in the rocket’s solid-fuel second stage.

Pleiades Neo 3 is the first in a constellation of four identical imaging satellites.

A second spacecraft is slated to launch in July, and two more are set to be lofted on a single Vega C rocket in the first half of 2022.

The full constellation will be able to visit any point on Earth at least twice a day, supplementing the lower resolution optical — and synthetic-aperture radar (SAR) — spacecraft that Airbus also operates.

Five years in the making, it is the company’s biggest 100% self-funded program in space and defense, Airbus Defence and Space head of intelligence Francois Lombard told SpaceNews in a pre-launch interview.

Up until now, Lombard said only U.S.-based Maxar Technologies has been offering commercial customers 30-centimeter resolution imaging with its WorldView constellation.

Pleiades Neo will be Airbus’ workhorse imagery constellation for the next 10-12 years.

Lombard said the company’s bet on four identical satellites underlines its confidence in the market’s direction toward higher resolution imagery.

“We will grab a big part of this market,” he said.

“Our expectation is that it is a market that will continue to grow.”

He pointed to how the company’s commercial traction is already validating this approach. Usually, satellite customers wait to see how a spacecraft operates in orbit before making commitments, but Lombard said the company had racked up agreements worth “hundreds of millions” in 2019.

“Here I can say we benefit from the long relationship [and] trust in the Airbus technology,” he said, pointing to the advantage the company has in controlling the spacecraft from end-to-end.

Reversing a historic dynamic for the industry, these pre-launch customers are more on the commercial side of the market, he added, while the government segment has been conservative and will be more of a “second step complement.”

The WorldView Legion constellation, which Maxar expects will triple its ability to collect 30-centimeter-resolution optical imagery, are set to launch on SpaceX Falcon 9 rockets.

Before the COVID-19 pandemic, Maxar had planned to start launching WorldView Legion satellites in the first quarter of 2021.

Keen to sign up for space tourism? Here are 6 things to consider (besides the price…