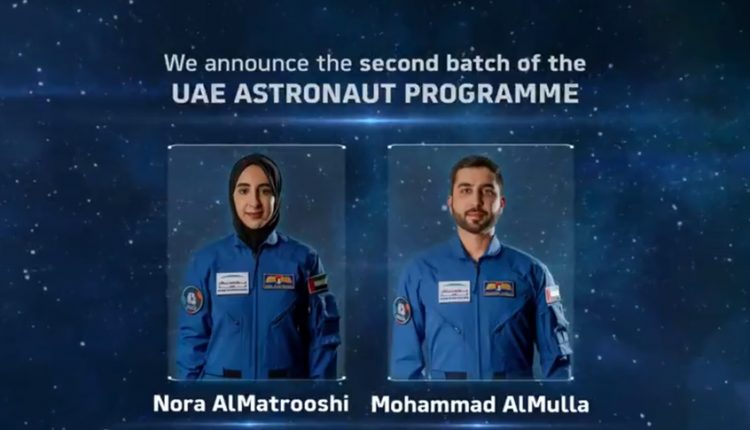 WASHINGTON — The United Arab Emirates doubled the size of its astronaut corps April 10 with the selection of two new astronauts, including the first woman, who will train at NASA starting later this year.

The UAE government announced it picked Nora AlMatrooshi and Mohammad AlMulla from a pool of 4,305 applicants to join the country’s small astronaut corps. They join Hazzaa AlMansoori and Sultan AlNeyadi, the first Emarati astronauts selected in 2018.

AlMatrooshi is the first woman selected as an Emirati astronaut. A mechanical engineer, she has been working for the National Petroleum Construction Company in the UAE. AlMulla is a pilot and head of the training department of the Dubai Police’s Air Wing Centre.

The two emerged from a selection process that started after the application period for the astronaut program closed in May 2020. That effort, run by the Mohammed Bin Rashid Space Centre (MBRSC), narrowed down the 4,305 initial applicants to 122 candidates, who were interviewed virtually.

Those interviews cut the remaining candidates in half, who underwent medical screenings that resulted in 30 finalists. Another round of interviews resulted in 14 people chosen for interviews with current UAE astronauts AlMansoori and AlNeyadi, along with NASA astronauts Jessica Meir and Anne McClain. From that group, four candidates underwent “rigorous tests” for fitness, communications skills and teamwork, from which the center selected AlMatrooshi and AlMulla.

“The team at MBRSC has worked tirelessly after receiving applications to evaluate them according to specific criteria and standards, and then conducted successive evaluations to ensure the selection of the best candidates, until we reached this point to announce the new astronauts,” Salem AlMarri, head of the astronaut program at MBRSC, said in a statement.

In an interview last year, AlMarri said he expected that one of the new astronauts would be a woman, given that about a third of the applicants were women. “We will select the best and the brightest from the people that applied,” he said then. “I would love to see one or two of those seats go to a female Emirati.”

So far, only one Emirati has gone to space: AlMansoori, who flew to the International Space Station in the fall of 2019 for a weeklong stay. The UAE government has not announced any firm plans to fly additional astronauts, either to the ISS or on other missions.

AlMarri said last year that the UAE was considering options to fly its astronauts on both Soyuz missions as well as on commercial crew vehicles from Boeing and SpaceX, but was not considering working with China. “We plan through next year to look at trying to get different opportunities to secure a seat for one of our astronauts,” he said.

New laser to help clear the sky of space debris