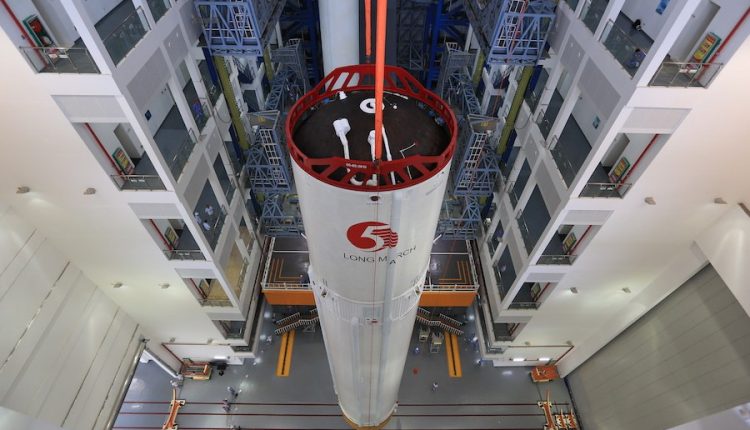 
When it comes to space debris, what goes up, often comes down. And while smaller bits of debris drop from orbit worldwide all the time, the reentry of a large mass object is spectacular and worthy of note.

This is the case for a large object generated during a recent launch, when China hoisted the core Tianhe module for its new modular space station into orbit just last week. Weighing in at 22.5 metric tons, Tianhe will soon host taikonauts as the modular station begins to take shape in orbit.

China launched Tianhe on April 29th from the Wenchang Space Launch Center atop its new heavy lift rocket, the Long March 5B. This was the seventh Long March 5 launch, which made its debut on November 3, 2016.

The launch generated two orbiting objects: the Tianhe core module and the Long March 5 booster’s core stage, which now carry the COSPAR designations 2021-035A and B, respectively.

The Long March 5B is a two-stage rocket, with four large boosters mounted around a massive core stage. This 21-metric ton (when empty) core stage is seven times more massive than SpaceX’s Falcon 9 second stage and three times that of a Russian Soyuz second stage, both of which are typically used to deploy cargo and crew to the International Space Station and reenter shortly afterward.

“We don’t know much about the detailed design of the Long March 5B,” says space journalist Andrew Jones, who tracks China’s spaceflight program. “Both Tianhe and the core stage were initially tracked in very similar orbits, so either the stage had no capability to lower its orbit, or any planned measures failed.”

Tianhe was soon recovered by satellite watchers worldwide in its expected 41.5° inclination orbit, circling the planet once every 92 minutes about 230 miles (370 km) above Earth’s surface. But what surprised many observers is that — rather than being redirected into the ocean shortly after launch — the core stage remained in orbit as well. In fact, observations of the booster flashing on passes this past weekend suggest that it’s now tumbling end-over-end, meaning China has no means to bring it down in a controlled fashion.

The Long March Rocket Body (CZ-5B R/B) continues to make impressive passes over Iowa. Here is the pass this morning over Marion, Iowa at 4:45 am CDT. Current estimates indicate the out of control rocket body will reenter Earth’s atmosphere around May 8th or 9th. pic.twitter.com/jRBF5iYsJ4

What is known is that with a current perigee of altitude of just 100 miles (162 kilometers), the large rocket core won’t stay in orbit for very long before drag from the upper atmosphere does it in. The current ebb in solar activity (which can cause the upper atmosphere to “puff out,” increasing drag on satellites) may grant the core stage a very brief reprieve, but best estimate from Space-Track currently sets the reentry window as May 8th at 22:11 Universal Time (6:11 p.m. EDT) ±21 hours. Expect that window to narrow as it gets closer. Another good site to follow for this and other upcoming reentries is aerospace.org.

A Recent History of Massive Reentries

China’s employment of the Long March 5B heavy lift rocket represents the first “by design” uncontrolled reentry of a spacecraft with a mass exceeding 10 tons in the past 30 years. Other recent high-profile reentries include Russia’s 13.5-metric-ton failed Phobos-Grunt mission in January 2012, and the 5.9-ton UARS satellite in September 2011. Last year, the half-ton OGO 1 observatory — in orbit since 1964 — reentered over Tahiti. More recently, a plunging Falcon 9 second stage created quite a light show over Washington State.

The video below shows the death plunge of the European Space Agency’s Jules Verne spacecraft (ATV 1) on September 29, 2008.

Spotting Tianhe and the Wayward Booster

The booster’s orbital inclination means that it can potentially come down anywhere on Earth between the latitudes 41° north and south, covering the southern halves of North America, Europe, and Asia, down to Africa, Australia, and most of South America. Heavens-Above offers sighting predictions for Tianhe (be sure to enter your location on Earth); to spot the booster, go to the Satellite Database page and type “48275” in both Satellite Number Range boxes.

Is this a portent of things to come? Certainly, China’s disregard for safety in failing to bring the core stage down in a controlled manner won’t earn it any good will in the modern space community, though it’s certainly not the only nation to have committed such an offense: for example, Russia’s nuclear-fueled Cosmos 954 satellite reentered over the high Canadian Arctic in January 1978, and the U.S. plutonium-powered Transit-5BN 3 reentered over the Indian Ocean shortly after its launch from Florida in April 1964. And many of us are old enough to remember the drama surrounding the return of Skylab in 1979, which left a debris field across Australia on reentry.

“China is planning a further 10 flights to construct its modular space station, two of which will be Long March 5B launches of experiment modules, as well as a later launch of the Xuntian co-orbital space telescope,” says Jones. “While the launch of Tianhe is a major and impressive step for China, the uncontrolled reentry aspect has impacted on the international image of Chinese spaceflight and so it will be interesting to see if and how China responds the the reaction to this launch.”

Today, most large payloads are purposely deorbited over “Point Nemo,” the spot in the South Pacific Ocean farthest from any land. Russia’s Mir space station ended its career this way on March 23, 2001, and the International Space Station will meet its end here as well, probably in the coming decade.

It will be interesting to see just where the Long March 5B core stage comes down, as we follow it on its final passes this weekend.

A new water treatment technology could also help Mars explorers: A catalyst that…

Did heat from impacts on asteroids provide the ingredients for life on Earth?