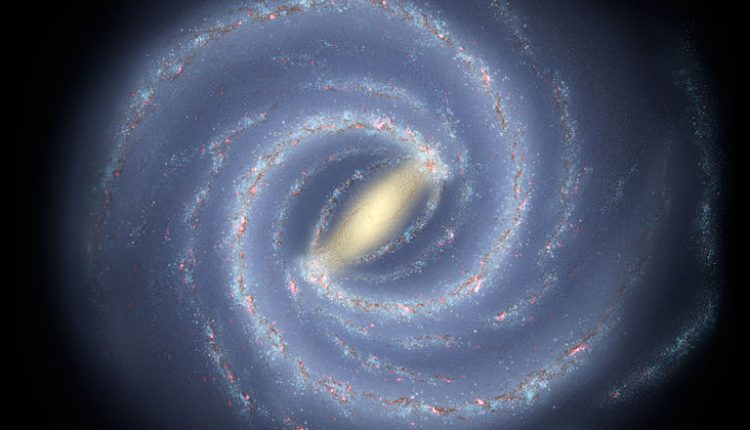 
The ancients gazed at the Milky Way for millennia, but it wasn’t until the mid-20th century that we discovered we live in a galaxy that takes a spiral shape.

But while astronomers now generally agree that our spiral has four major arms, what they actually look like is still open to question. That includes the Local Arm that we call home (which may or may not be an arm at all).

Two recent studies of the latest data release from the European Space Agency’s Gaia mission suggest our part of the spiral might not be as rural as once thought. The Local Arm gets an upgrade to a major spiral feature in the new maps, published in the January Astronomy & Astrophysics (preprint) and posted on the arXiv astronomy preprint server, respectively.

Determining the details of galactic structure is difficult because we’re mapping our galaxy from within, which is a bit like trying to tell what kind of plane you’re flying in by looking out the tiny porthole window. Not only is a bird’s-eye view forever out of reach, there’s also interstellar material blocking our view.

Even with those limitations in mind, how we see our galaxy depends on what we’re looking at. Some studies have measured 21-centimeter radio waves from hydrogen gas that suffuses the galaxy, the fuel for new star formation. Other studies have mapped hydrogen gas ionized by ultraviolet emission pouring out of stellar newborns. Still others look at radio masers, which trace shocks driven by young stellar winds.

Astronomers have used all these methods to trace stellar nurseries, which mark spiral arms in other galaxies and presumably our own. But it’s a case of blind men examining the proverbial elephant. Studies differ on the length and angles of the arms. The nature of the Local Arm also depends on the technique used to measure it.

With the advent of the Gaia mission, which is mapping exact positions and motions of a billion stars, Milky Way maps have experienced something of a renaissance. In recent months, two independent teams have set out to recast the local spiral structure: one led by Ye Xu (Purple Mountain Observatory, China) and the other by Eloisa Poggio (University of Côte d’Azur, France).

Xu and his colleagues used the latest Gaia data release to select almost 10,000 stars of spectral type O to B2, massive and brilliant stars that are at most 20 million years old and thus not too far from their birthplaces in the spiral arms.

Meanwhile, Poggio and her colleagues mapped more than 750,000 of the most massive main-sequence stars, almost 700 newborn star clusters, and nearly 2,000 young Cepheid variables, giant pulsating stars with well-known distances. This team is working with more objects and thus has better statistics. But the stars and stellar groups are all somewhat older (though still less than 100 million years old); with more time to travel away from the spiral arm they were born in, they give a fuzzier view of the spiral structure.

A Longer Local Arm, and a Less Grand Milky Way

Despite their differences, both studies find that the Local Arm is longer than expected, between 23,000 and 26,000 light-years long. The finding upgrades it to a major spiral feature, if not quite a full-size arm.

But the teams still don’t agree on what the Local Arm looks like. While Xu’s team finds that the arm might bend, spiraling inward, the map made by Poggio’s team shows it as a nearly straight line. The Local Arm may also have a large gap, which makes it hard to identify different sections that belong to it, says Mark Reid (Center for Astrophysics, Harvard & Smithsonian), who was not involved in the study.

“Spiral arms do not have a single, constant pitch angle,” Reid explains. “Instead, they appear to be formed out of segments which have markedly different pitch angles.”

Astronomers have long thought that spiral arms form via density waves, in which stars circling the galactic center pile up in spiral-shaped traffic jams. While many stars are born in the traffic jam, they eventually sail through, but the traffic jam stays in place.

However, the raggedy shape of the Milky Way’s arms, including the Local Arm’s segmentation, could point to a different scenario, one in which clumps of stars form and then elongate into arm segments. Those segments join up to form longer arms, but there’s no true spiral shape that’s maintained over time.

The same mechanism isn’t necessarily at work everywhere; two-armed “grand-design” spirals might still originate as traffic jams. But evidence suggests that Milky Way is not of the grand-design variety.

As Gaia continues to deliver increasingly precise measurements of stars’ positions in our galaxy, especially the younger and fainter (and thus more distant) ones, astronomers will be able to confirm the details of the arm we live in, as well as the other arms of the Milky Way.

Astrophysicist outlines plans for the gravitational wave observatory on the moon