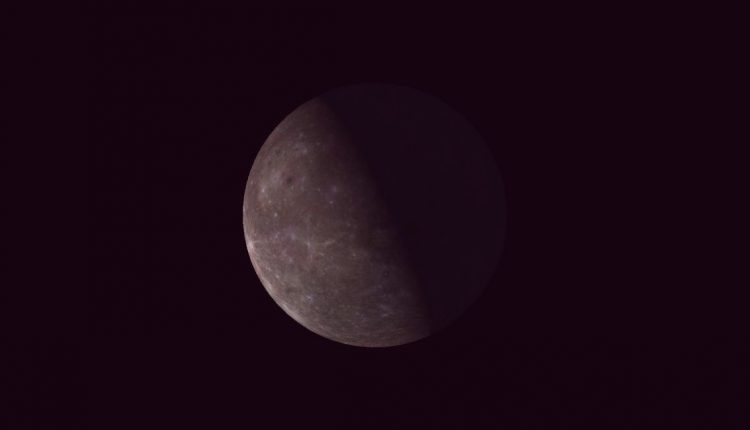 The brightest planets in April’s night sky: How to see them (and when)


April starts off with but a single planet in the evening sky: Mars. The red planet continues to slowly recede from the Earth and subsequently continues to fade. But by month’s end, the smallest and closest planet to the sun, Mercury, begins to appear, low in the western sky after sunset. And if you have a flat and unobstructed horizon, you might also catch a brief glimpse of Venus shining through the bright twilight below Mercury. Meanwhile, in the predawn skies, Jupiter and Saturn are evident low in the east-southeast sky.

In our schedule, remember that when measuring the angular separation between two celestial objects, your clenched fist held at arm’s length measures roughly 10-degrees. Here, we present a schedule below which provides some of the best planet viewing times as well directing you as to where to look to see them.

Mercury — stands at superior conjunction on April 18th. Approaching perihelion, it will quickly enter the evening sky, becoming an easy naked-eye sight by month’s end. By the evening of the 27th, Mercury will attain an elongation of 10° east of the sun and sets about 55 minutes after it. At magnitude -1.5 (a trifle brighter than Sirius, the brightest star), Mercury should be readily visible in binoculars about 12° to the southwest of (below) the Pleiades. Greatest elongation will occur on May 17th.

Venus — was in superior conjunction on the far side of the sun on March 26th, so it is hidden by the sun’s glare in early April. By April 30th, however, Venus should be visible very low near the horizon about 20 degrees north of due west about 15 to perhaps 20 minutes after sunset and about 4½° directly below Mercury. It appears faint in such bright twilight despite shining at magnitude -3.9; bring binoculars.

Mars — is still prominent high in the west after dusk. It progresses from Taurus into the feet of Gemini during April, fading from about the intensity of the star Deneb to that of the star Castor. But even by month’s end, Mars doesn’t set until after midnight (daylight saving time). This evening it will appear directly between Beta (β) and Zeta (ζ) Tauri, the moderately bright stars that mark the horn tips of Taurus, the Bull. The golden orange planet moves on, reaching its most northerly point in the heavens on April 22nd. Mars, already tiny, shrinks even smaller in telescopes week by week. On the evening of the 17th, you’ll see a 28% illuminated waxing crescent moon positioned 5½° to the upper left of Mars. And then on the 26th, a special treat awaits skywatchers, when binoculars and small telescopes show Mars only ½° from the center of the sprawling star cluster M35, itself ½° across.

Jupiter — the largest of the planets currently rises about 2 hours before sunrise and by late April more than 3 hours before, but even at dawn it’s still rather low in the southeast. Jupiter’s big disk is always pleasing in telescopes, however. This is one of the infrequent years when we’re near enough to Jupiter’s equatorial plane to see the planet’s Galilean moons eclipsing and occulting one another, though we won’t get good views of them until later in the year, when this giant world has climbed out of the murk along the horizon. The day after visiting Saturn, on the morning of the 7th, an even more slender lunar crescent is about 5° below and slightly to the right of Jupiter.

Saturn — the ringed planet rises around 4:15 a.m. local daylight time at the beginning of April, and 2:25 a.m. by month’s end. This is only an hour or two before dawn begins to wash away the stars. By mid-twilight, 45 minutes before sunrise, Saturn is roughly 20° up in the southeast. Here’s your chance for an early telescopic preview of the ringed planet, which will be at its best in the evening sky at the end of the summer. On the morning of the 6th, look for the sedate yellowish-white glow of Saturn, about 4¾° above and slightly to the left of the 29% illuminated waning crescent moon.

Joe Rao serves as an instructor and guest lecturer at New York’s Hayden Planetarium. He writes about astronomy for Natural History magazine, the Farmers’ Almanac and other publications in New York’s lower Hudson Valley. Follow us on Twitter @Spacedotcom and on Facebook.