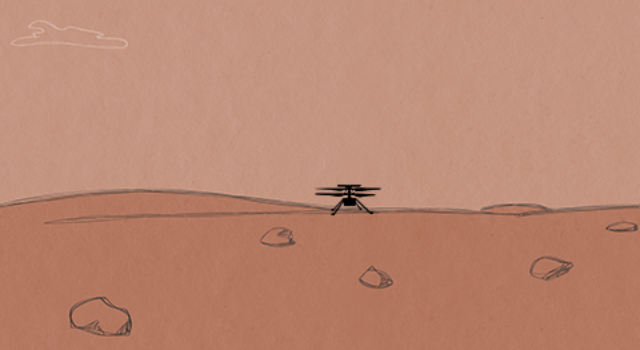 
NASA has shared a new learning guide for students to create their own video game to explore Mars with a helicopter like Ingenuity, which is expected to make its debut flight this week.

The Mars helicopter Ingenuity arrived at the Red Planet on Feb 18., attached to the belly of NASA’s Perseverance rover. The robotic helicopter was lowered from the rover and touched down on the Martian surface for the first time on April 3 — the first step in preparing the aircraft for its first test flight, which is slated for Wednesday (April 14).

Ingenuity has a limited experiment window of up to 31 days (30 Mars days, or sols), during which NASA teams will attempt up to five test flights, representing the first ever attempt at powered, controlled flights on another planet. To celebrate the helicopter’s upcoming flight, NASA has shared an interactive tutorial for students to design and fly their own Mars helicopter using a video programming platform called Scratch.

Join our forums here to discuss the Perseverance rover on Mars. What do you hope finds?

“The Mars helicopter is a technology demonstration mission designed to show that a small, lightweight helicopter can fly in the thin atmosphere of Mars,” a NASA Jet Propulsion Laboratory (JPL) representative said in the instructional video, which NASA shared on YouTube.

To complete this project, students will need access to a computer and the internet to download the Mars surface images and the Mars helicopter sprite image, which will be used for creating the video game. You can sign up for a free Scratch account or simply create a new project online.

To get started, you’ll need to upload the Mars images you downloaded to your new Scratch project. Then, you’ll be able to program controls for the helicopter to fly up, down, left or right, and create a landing target for when you play your video game.

Additionally, Ingenuity’s test flights on Mars will last no more than 90 seconds each. Therefore, you can design your video game to simulate the Mars helicopter test flights by setting a countdown timer for players.

You can find the full step-by-step learning guide to code your own Mars helicopter video game online, along with other educational activities for students to participate in NASA’s Ingenuity Mars helicopter mission from home.