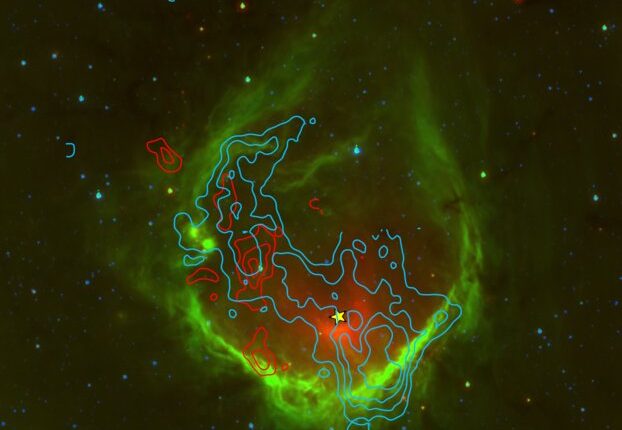 Stellar feedback and an airborne observatory: Team determines a nebula to be much younger than previously believed

In the southern sky, situated about 4,300 light years from Earth, lies RCW 120, an enormous glowing cloud of gas and dust. This cloud, known as an emission nebula, is formed of ionized gases and emits light at various wavelengths. An international team led by West Virginia University researchers studied RCW 120 to analyze the effects of stellar feedback, the process by which stars inject energy back into their environment. Their observations showed that stellar winds cause the region to expand rapidly, which enabled them to constrain the age of the region. These findings indicate that RCW 120 must be less than 150,000 years old, which is very young for such a nebula.

About seven light years from the center of RCW 120 lies the boundary of the cloud, where a plethora of stars are forming. How are all of these stars being formed? To answer that question, we need to dig deep into the origin of the nebula. RCW 120 has one young, massive star in its center, which generates powerful stellar winds. The stellar winds from this star are much like those from our own Sun, in that they throw material out from their surface into space. This stellar wind shocks and compresses the surrounding gas clouds. The energy that is being input into the nebula triggers the formation of new stars in the clouds, a process known as “positive feedback” because the presence of the massive central star has a positive effect on future star formation. The team, featuring WVU postdoctoral researcher Matteo Luisi, used SOFIA (the Stratospheric Observatory for Infrared Astronomy) to study the interactions of massive stars with their environment.

SOFIA is an airborne observatory consisting of an 8.8-foot (2.7-meter) telescope carried by a modified Boeing 747SP aircraft. SOFIA observes in the infrared regime of the electromagnetic spectrum, which is just beyond what humans can see. For observers on the ground, water vapor in the atmosphere blocks much of the light from space that infrared astronomers are interested in measuring. However, its cruising altitude of seven miles (13 km), puts SOFIA above most of the water vapor, allowing researchers to study star-forming regions in a way that would not be possible from the ground. Overnight, the in-flight observatory observes celestial magnetic fields, star-forming regions (like RCW 120), comets and nebulae. Thanks to the new upGREAT receiver that was installed in 2015, the airborne telescope can make more precise maps of large areas of the sky than ever before. The observations of RCW 120 are part of the SOFIA FEEDBACK survey, an international effort led by researchers Nicola Schneider at the University of Cologne and Alexander Tielens at the University of Maryland, which makes use of upGREAT to observe a multitude of star-forming regions.

The research team opted to observe the spectroscopic [CII] line with SOFIA, which is emitted from diffuse ionized carbon in the star-forming region. “The [CII] line is probably the best tracer of feedback on small scales, and—unlike infrared images—it gives us velocity information, meaning we can measure how the gas moves. The fact that we can now observe [CII] easily across large regions in the sky with upGREAT makes SOFIA a really powerful instrument to explore stellar feedback in more detail than was possible previously,” says Matteo.

Using their [CII] observations from SOFIA, the research team found that RCW 120 is expanding at 33,000 mph (15 km/s), which is incredibly fast for a nebula. From this expansion speed, the team was able to put an age limit on the cloud and found that RCW 120 is much younger than previously believed. With the age estimate, they were able to infer the time it took for the star formation at the boundary of the nebula to kick in after the central star had been formed. These findings suggest that positive feedback processes occur on very short timescales and point to the idea that these mechanisms could be responsible for the high star formation rates that occurred during the early stages of the universe.

Looking forward, the team hopes to expand this type of analysis to the study of more star forming regions. Matteo says, “The other regions we are looking at with the FEEDBACK survey are in different stages of evolution, have different morphologies, and some have many high-mass stars in them, as opposed to only one in RCW 120. We can then use this information to determine what processes primarily drive triggered star formation and how feedback processes differ between various types of star-forming regions.”

Lifting the veil on star formation in the Orion Nebula

Citation:
Stellar feedback and an airborne observatory: Team determines a nebula to be much younger than previously believed (2021, April 13)
retrieved 13 April 2021
from https://phys.org/news/2021-04-stellar-feedback-airborne-observatory-team.html

Spotting cows from space: Researchers use satellite imagery to track interactions between cows and elk at the interface of wildland and rangeland

Amounts of organic molecules in planetary systems differ from early on