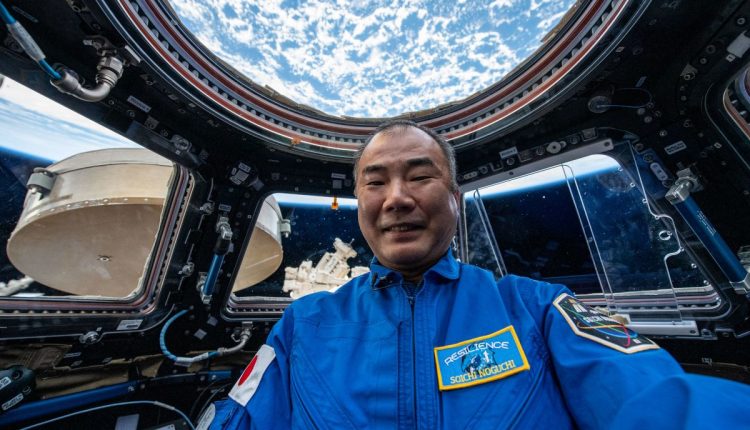 
Soichi Noguchi is a Japanese astronaut and engineer with the Japan Aerospace Exploration Agency (JAXA).

His first spaceflight took him to the International Space Station in July 2005 on Discovery’s STS-114 mission, which was the first space shuttle flight after the Columbia tragedy in 2003. He returned to the ISS in December 2009 via a Soyuz spacecraft.

On his third mission to space, he served as mission specialist on the Crew-1 flight of SpaceX‘s Crew Dragon, launching on Nov. 15, 2020. The historic voyage was the first operational commercial crewed spacecraft to travel to the ISS.

He is also one of only three people to have flown into space on three different spacecraft: NASA’s space shuttle, Soyuz and Crew Dragon. He is the first non-American astronaut to do so.

As part of Expedition 64, Noguchi is expected to spend nearly 6 months in orbit, adding to his previous 177 days in space.

Soichi Noguchi was born in 1965 in Yokohama, Kanagawa, according to his JAXA biography. He joined the Scouts when he was 9 years old, according to the Scout News — an organization that he credits with his early experience learning the importance of teamwork.

In a 2010 interview with NASA, Noguchi said that both science fiction and fact inspired his decision to become an astronaut. “I really liked all the rockets and spacecraft and space adventures when I was in childhood. I watched all the movies like ‘Star Wars,’ or the ‘Star Treks’ or Japanese anime when themed with the space adventure,” he said.

“When I was a high school freshman I saw the [first] space shuttle, STS-1, go up on television and I thought, ‘Wow, this is a great career, great profession; I wonder if I can be someday like a space traveler,'” he added.

When did Soichi Noguchi become an astronaut?

Noguchi was chosen to be an astronaut candidate by the organization now known as JAXA in 1996.

After two years of Astronaut Candidate Training at NASA’s Johnson Space Center, Noguchi was qualified for flight assignments aboard the space shuttle in 1998. That same year, he also participated in crewed space systems training at the Gagarin Cosmonaut Training Center (GCTC) in Russia. He then continued advanced training with NASA while working on the Japanese Experiment Module (JEM) development tests.

In April 2001, he was assigned as a crew member for NASA’s STS-114 mission that launched in 2005, during which he spent two weeks in space and conducted three spacewalks. As a mission specialist aboard the space shuttle Discovery, Noguchi was a member of the first crew to launch after the disastrous loss of the astronauts on the space shuttle Columbia in 2003.

In the crew’s first post-mission briefing, Noguchi was one of many members of the crew and control teams to recall the previous mission’s tragedy. “Obviously, Columbia was very close in our minds,” Noguchi said.

Noguchi served as a mission specialist on the Crew-1 SpaceX Crew Dragon, the first full-fledged private crewed spacecraft mission to travel to the ISS. It launched Nov. 15, 2020. The Crew-1 astronauts named the spacecraft “Resilience” in recognition of challenges that people have faced and overcome during the COVID-19 pandemic of 2020.

His first spacewalk as Flight Engineer of Expedition 64 set a world record (presented by the Guinness World Records organization) for the longest gap between spacewalks — an interval of 15 years, 214 days.