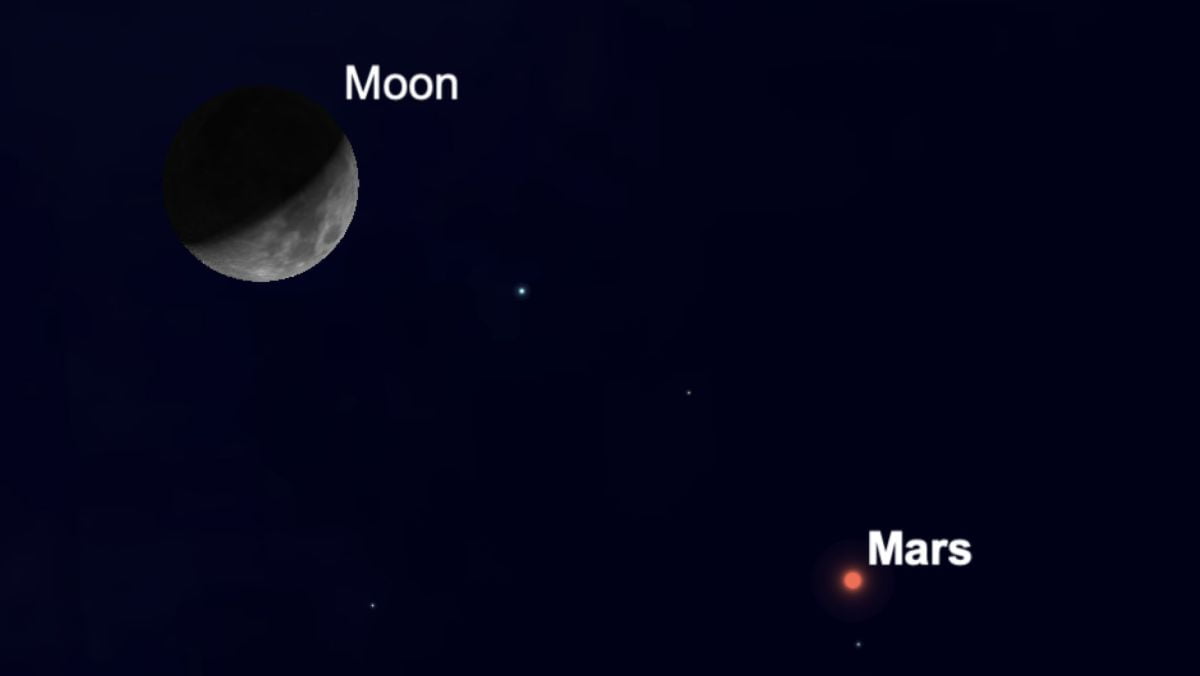 
Ever since Perseverance, the car-sized rover, landed on the surface of Mars on Feb. 18, renewed interest in the red planet has soared. One of the questions that has been asked in recent weeks, is where is it in the current night sky?

Mars has actually been a rather prominent evening object for several months, and in fact at one-point last October it was the third-brightest object in the nighttime sky.

But that has all changed and Mars has since diminished considerably in brightness. Nonetheless it is still readily visible to the unaided eye and on Friday evening (March 19) you’ll be able to readily identify it thanks to its proximity to our nearest neighbor in space: the moon.

At nightfall on Friday evening, look more than halfway up from the west-southwest horizon. There you’ll see a crescent moon, 35% illuminated. And hovering just off to its lower right will be a moderately bright yellow-orange “star.” But that’s no star — it’s Mars, which continues to recede from Earth and consequently continues to fade. And it might be difficult to believe that about 5 months ago it shone some 33 times brighter.

On Friday it will be 153.3 million miles (246.6 million kilometers) away and shining at magnitude +1.2; on the list of the 21 brightest stars, Mars would currently rank 18th; quite a come down from early October 2020, when it shone with brilliance that rivaled the brilliant planet Jupiter. In terms of apparent size, the disk of Mars is downright tiny; only a large amateur telescope is likely to show any dusky markings on it.

The gap separating the moon from Mars will be equivalent to about 3 degrees, which in terms of angular size is slightly greater than the length of the three stars that make up the belt of Orion, the hunter.

The orbit of Mars, like that of Venus has a resonance with that of Earth, though a less simple one: in the time for Earth to go around the sun 79 times, Mars goes around almost 42 times. Thus, in each Earth year Mars travels a little more than half of its orbit around the sun. If it traveled exactly half, we would pass Mars — that is, there would be an opposition — each second year, at the same month and place. As it is, the oppositions occur about once every two years and about 50 days.

So right now, Mars is repeating its behavior of 79 years ago, in 1942. What is always different is the pattern of its conjunctions with the moving array of other planets. Mars is usually involved in many more conjunctions — meaning it shares the same celestial longitude and appears to make a close approach to another object in the night sky — than are the more distant planets because its long course around our sky carries it in front of them.

Mars is currently positioned against the stars of Taurus, the bull. In fact, it is hovering about 7 degrees to the upper left of a star which is noticeably brighter: Aldebaran, which marks the angry eye of the bull. And indeed, back in late March 1942, Mars had a very similar conjunction with Aldebaran.

Just don’t get the planet confused with the star! Both objects will be of a similar orange color, but on Friday night Mars will be the dimmer and closer object to the moon.

Joe Rao serves as an instructor and guest lecturer at New York’s Hayden Planetarium. He writes about astronomy for Natural History magazine, the Farmers’ Almanac and other publications. Follow us on Twitter @Spacedotcom and on Facebook.