One of the most comprehensive pictures of our changing planet is now available to the public. Thanks to the close collaboration between Google Earth, ESA, the European Commission, NASA, and the US Geological Survey, 24 million satellite photos from the past 37 years have been embedded into a new layer of Google Earth – creating a new, explorable view of time on our planet. Credit: Google Earth Timelapse (Google, Landsat, Copernicus)

One of the most comprehensive pictures of our changing planet is now available to the public. Thanks to the close collaboration between Google Earth, ESA, the European Commission, NASA and the US Geological Survey, 24 million satellite photos from the past 37 years have been embedded into a new layer of Google Earth – creating a new, explorable view of time on our planet.

In the biggest update to Google Earth since 2017, users can now discover our planet in an entirely new dimension – time. With a new feature called Timelapse in Google Earth, users can witness nearly four decades of change across the entire planet. The update will show the visual evidence of the drastic changes taking place in our world including the effects of climate change and human behavior.

Users can now take a journey across the world, exploring the ever-changing shapes of coastlines, follow the growth of megacities, track deforestation and much more. For each topic, Google Earth will take you on a guided tour to better understand the planet’s changes and how people experience them.

Rebecca Moore, Director of Google Earth, said, “This update was made possible thanks to open data provided by the European Union’s Copernicus program, and its Sentinel satellites, as well as NASA and the US Geological Survey’s Landsat program. The Copernicus Sentinel-2 high-resolution imaging mission was integral in the development of Google Earth’s new Timelapse feature and the unique global view we are now bringing to people everywhere.”

Maurice Borgeaud, Head of the Science, Applications & Climate Department at ESA Earth Observation Programmes, commented, “The use of Copernicus Sentinel data makes it possible for millions of people to explore changes on Earth. But what the operational fleet of European satellites allows us to do goes much further! We are analyzing all aspects of changes on our planet – no matter whether natural or manmade – and their impact on the climate.”

The Sentinels are a fleet of dedicated EU-owned satellites, designed to deliver the wealth of data and imagery that are central to the European Union’s Copernicus environmental program. The Copernicus Sentinel-2 high-resolution imaging mission, used predominantly for land monitoring, was key to improving Timelapse and its functionality. 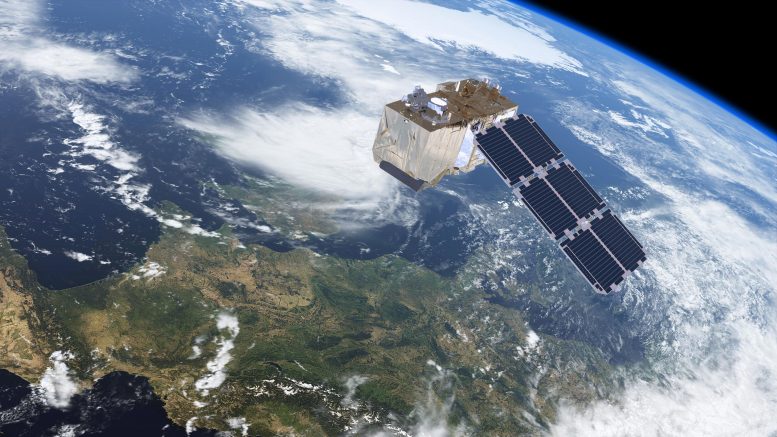 Copernicus Sentinel-2 is a polar-orbiting mission based on a constellation of two identical satellites in the same orbit, 180° apart for optimal coverage and data delivery. The combination of high resolution, novel spectral capabilities, a swath width of 290 km and frequent revisit times provides unprecedented views of Earth, every five days at 10 m spatial resolution.

This new timelapse capability required a significant amount of time and involved ‘pixel crunching’ in Earth Engine, Google’s platform for geospatial analysis. In order to add the animated Timelapse imagery to Google Earth, more than 20 million satellite images from 1984 to 2020 were gathered. In total, it took more than 2 million processing hours across thousands of machines in Google Cloud to weave 20 petabytes of satellite imagery into a single 4.4 terapixel-sized video mosaic.

In order to explore Timelapse, users can use the search bar to choose any place on the planet where they want to see time in motion. Google Earth will be updated with Timelapse imagery annually throughout the next decade as more satellite images become available.

To explore this new layer in Google Earth, go to Timelapse.