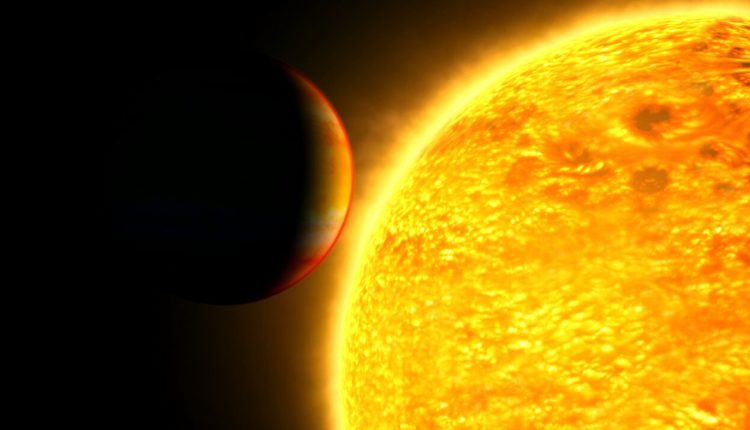 In the quest for habitable planets beyond our own, NASA is studying a mission concept called Pandora, which could eventually help decode the atmospheric mysteries of distant worlds in our galaxy. One of four low-cost astrophysics missions selected for further concept development under NASA’s new Pioneers program, Pandora would study approximately 20 stars and exoplanets—planets outside of our solar system—to provide precise measurements of exoplanetary atmospheres.

This mission would seek to determine atmospheric compositions by observing planets and their host stars simultaneously in visible and infrared light over long periods. Most notably, Pandora would examine how variations in a host star’s light impacts exoplanet measurements. This remains a substantial problem in identifying the atmospheric makeup of planets orbiting stars covered in starspots, which can cause brightness variations as a star rotates.

Pandora is a small satellite mission known as a SmallSat, one of three such orbital missions receiving the green light from NASA to move into the next phase of development in the Pioneers program. SmallSats are low-cost spaceflight missions that enable the agency to advance scientific exploration and increase access to space. Pandora would operate in Sun-synchronous low-Earth orbit, which always keeps the Sun directly behind the satellite. This orbit minimizes light changes on the satellite and allows Pandora to obtain data over extended periods. Of the SmallSat concepts selected for further study, Pandora is the only one focused on exoplanets.

“Exoplanetary science is moving from an era of planet discovery to an era of atmospheric characterization,” said Elisa Quintana, an astrophysicist at NASA’s Goddard Space Flight Center in Greenbelt, Maryland, and the principal investigator for Pandora. “Pandora is focused on trying to understand how stellar activity affects our measurements of exoplanet atmospheres, which will lay the groundwork for future exoplanet missions aiming to find planets with Earth-like atmospheres.”

Pandora concentrates on studying exoplanetary and stellar atmospheres by surveying planets as they cross in front of—or transit—their host stars. To accomplish this, Pandora would take advantage of a proven technique called transit spectroscopy, which involves measuring the amount of starlight filtering through a planet’s atmosphere, and splitting it into bands of color known as a spectrum. These colors encode information that helps scientists identify gases present in the planet’s atmosphere, and can help determine if a planet is rocky with a thin atmosphere like Earth or if it has a thick gas envelope like Neptune.

This mission, however, would take transit spectroscopy a step further. Pandora is designed to mitigate one of the technique’s most crucial setbacks: stellar contamination. “Stars have atmospheres and changing surface features like spots that affect our measurements,” said Jessie Christiansen, the deputy science lead at the NASA Exoplanet Archive at Caltech in Pasadena, California, and a co-investigator for Pandora. “To be sure we’re really observing an exoplanet’s atmosphere, we need to untangle the planet’s variations from those of the star.”

“Stellar contamination is a sticking point that complicates precise observations of exoplanets,” said Benjamin Rackham, a 51 Pegasi b Postdoctoral Fellow at the Massachusetts Institute of Technology in Cambridge and a co-investigator for Pandora. “Pandora would help build the necessary tools for disentangling stellar and planetary signals, allowing us to better study the properties of both starspots and exoplanetary atmospheres.”

Joining forces with NASA’s larger missions, Pandora would operate concurrently with the James Webb Space Telescope, slated for launch later this year. Webb will provide the ability to study the atmospheres of exoplanets as small as Earth with unprecedented precision, and Pandora would seek to expand the telescope’s research and findings by observing the host stars of previously identified planets over longer periods.

Missions such as NASA’s Transiting Exoplanet Survey Satellite (TESS), Hubble Space Telescope, and the retired Kepler and Spitzer spacecraft have given scientists astonishing glimpses at these distant worlds, and laid a strong foundation in exoplanetary knowledge. These missions, however, have yet to fully address the stellar contamination problem, the magnitude of which is uncertain in previous studies of exoplanetary atmospheres. Pandora seeks to fill these critical gaps in NASA’s understanding of planetary atmospheres and increase the capabilities in exoplanet research.

“Pandora is the right mission at the right time because thousands of exoplanets have already been discovered, and we are aware of many that are amenable to atmospheric characterization that orbit small active stars,” said Jessie Dotson, an astrophysicist at NASA’s Ames Research Center in California’s Silicon Valley and the deputy principal investigator for Pandora. “The next frontier is to understand the atmospheres of these planets, and Pandora would play a key role in uncovering how stellar activity impacts our ability to characterize atmospheres. It would be a great complement to Webb’s mission.”

A launch pad for exploration

Lawrence Livermore National Laboratory (LLNL), in Livermore, California, is co-leading the Pandora mission with NASA’s Goddard Space Flight Center. LLNL will manage the mission and leverage capabilities developed for other government agencies, including a low-cost approach to the telescope design and fabrication that enables this groundbreaking exoplanet science from a SmallSat platform.

NASA’s Pioneers program, which consists of SmallSats, payloads attached to the International Space Station, and scientific balloon experiments, fosters innovative space and suborbital experiments for early-to-mid-career researchers through low-cost, small hardware missions. Under this new program, Pandora would operate on a five-year timeline with a budget cap of $20 million.

Despite tight constraints, the Pioneers program enables Pandora to concentrate on a focused research question while engaging a diverse team of students and early career scientists from more than a dozen of universities and research institutes. This SmallSat platform creates an excellent blueprint for small-scale missions to make an impact in the astrophysics community.

“Pandora’s long-duration observations in visible and infrared light are unique and well-suited for SmallSats,” said Quintana. “We are excited that Pandora will play a crucial role in NASA’s quest for finding other worlds that could potentially be habitable.”

How can some planets be hotter than stars? We’ve started to unravel the mystery