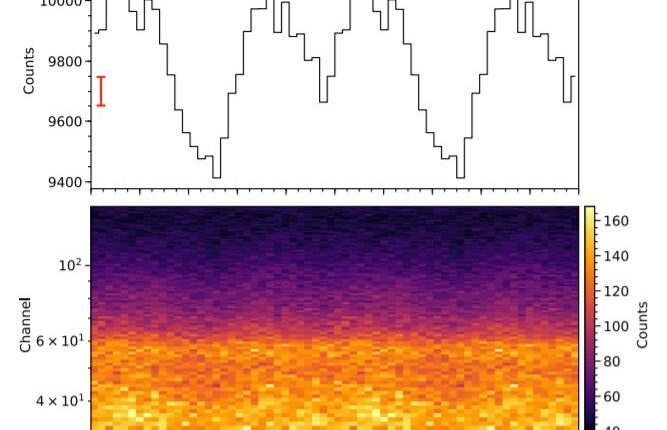 An international team of astronomers has carried out X-ray observations of a massive millisecond pulsar known as PSR J0740+6620. Results of the observational campaign, presented in a paper published May 14 on the arXiv pre-print repository, deliver important information regarding the properties of this pulsar.

Pulsars are highly magnetized, rotating neutron stars emitting a beam of electromagnetic radiation. The most rapidly rotating pulsars, with rotation periods below 30 milliseconds, are known as millisecond pulsars (MSPs).

Astronomers assume that they are formed in binary systems when the initially more massive component turns into a neutron star that is then spun up due to accretion of matter from the secondary star.

PSR J0740+6620 is an isolated-rotation-powered MSP spinning at approximately 346 Hz as it orbits with a binary companion. Previous studies reported that it contains a high-mass neutron star—at least two times more massive than our sun.

A group of astronomers led by Thomas E. Riley of the University of Amsterdam, the Netherlands, took a closer look at PSR J0740+6620 in order to shed more light on its nature. For this purpose, they employed the Neutron star Interior Composition Explorer (NICER) instrument onboard the International Space Station (ISS) and ESA’s XMM-Newton spacecraft.

The observations found that PSR J0740+6620 has an equatorial radius of about 12.39 km and a mass of approximately 2.07 solar masses. The radius is consistent with the values reported by other studies, while the mass is greater than previously thought, as previous studies pointed out to values between 1.34 and 1.44 solar masses.

According to the study, PSR J0740+6620 has a spin period of approximately 2.88 ms, and the neutral hydrogen column density for this pulsar was estimated to be at a level of some 450 quintillion/cm. The object is located around 3,900 light years away from the Earth.

Given that many parameters of PSR J0740+6620 remain unknown, the authors of the paper plan further investigation of this pulsar using NICER and XMM-Newton.

“In future work, we will use the improved pipeline presented in this Letter to perform joint analysis of the NICER and XMM data sets for PSR J0030+0451 and other sources,” the researchers noted.