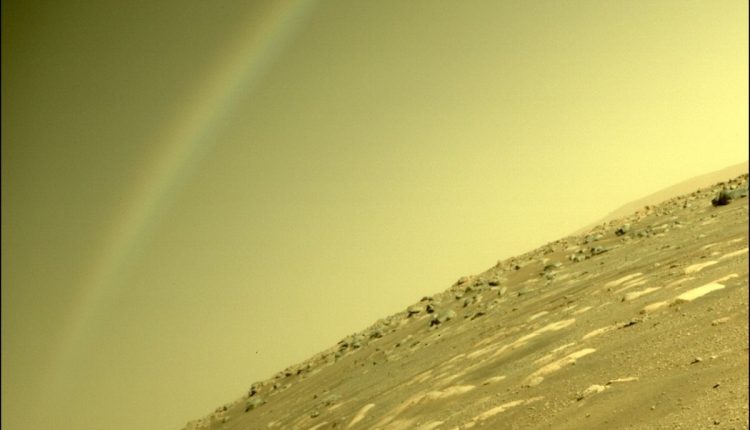 No, the Perseverance rover didn’t spot a rainbow on Mars


This Mars “rainbow” would lead only to fool’s gold.

NASA’s Perseverance rover snapped a photo on Sunday (April 4) that appeared to show a rainbow arcing across the dusty Martian sky. The striking image spread quickly across social media, as did the “rainbow” explanation, prompting NASA to step in with the real story.

“Many have asked: Is that a rainbow on Mars? No. Rainbows aren’t possible here. Rainbows are created by light reflected off of round water droplets, but there isn’t enough water here to condense, and it’s too cold for liquid water in the atmosphere. This arc is a lens flare,” agency officials wrote Tuesday via Perseverance’s official Twitter account, @NASAPersevere.

“I have sunshades on my front Hazcams, which were considered mission-critical (I need them for driving forward & I’m usually driving forward). Sunshades weren’t considered essential on my back Hazcams, so you can see scattered light artifacts in their images,” officials wrote in another @NASAPersevere tweet on Tuesday.

Ingenuity’s month-long flight campaign, which is designed to demonstrate that aerial exploration is feasible on Mars, could kick off as soon as Sunday (April 11), NASA officials have said.

After Ingenuity finishes flying, Perseverance will begin focusing on its own science goals. The car-sized rover will hunt for signs of ancient life on the floor of Jezero, which hosted a lake and a river delta billions of years ago.

Perseverance will also collect and cache several dozen particularly promising samples for return to Earth, where they can be examined in great detail by scientists in well-equipped labs. A joint NASA-European Space Agency campaign will haul this Mars material home, possibly as early as 2031.