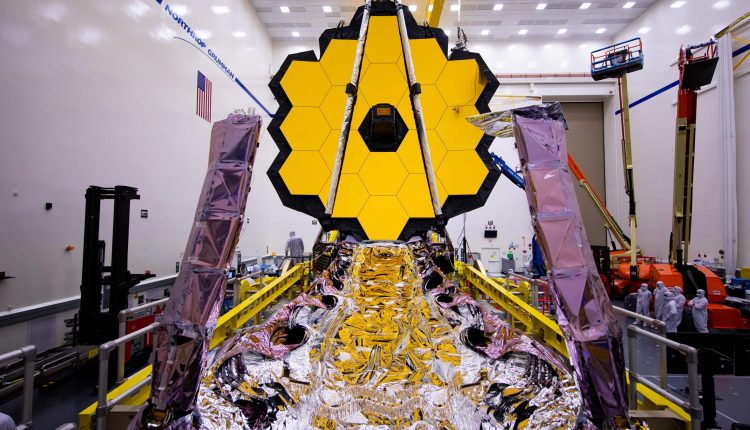 Both sides of the James Webb Space Telescope’s sunshield were lifted vertically in preparation for the folding of the sunshield layers. Credit: NASA/Chris Gunn

The sunshield — a five-layer, diamond-shaped structure the size of a tennis court — was specially engineered to fold up around the two sides of the telescope and fit within the confines of its launch vehicle, the Ariane 5 rocket. Now that folding has been completed at Northrop Grumman in Redondo Beach, California, the sunshield will remain in this compact form through launch and the first few days the observatory will spend in space.

Designed to protect the telescope’s optics from any heat sources that could interfere with its sight, the sunshield is one of Webb’s most critical and complex components. Because Webb is an infrared telescope, its mirrors and sensors need to be kept at extremely cold temperatures to detect faint heat signals from distant objects in the universe.

In space, one side of the sunshield will always reflect light and background heat from the Sun, Earth and Moon. Thermal models show that the maximum temperature of the outermost layer is 383 Kelvin, or about 230 degrees Fahrenheit. Meanwhile, the other side of the sunshield will always face deep space, with the coldest layer having a modeled minimum temperature of 36 Kelvin, or about minus 394 degrees Fahrenheit.

Fully deployed, the telescope’s sunshield measures almost 70 feet by 47 feet (21 meters by 14 meters). When stowed inside the rocket for launch, the folded sunshield will be packaged in a very confined area in between other structures of the observatory to accommodate the limited space inside the 18-foot (5.4-meter) diameter rocket fairing.

During the sunshield folding process for the James Webb Space Telescope, a team of technicians carefully fold each layer in a zigzag pattern to create accordion-like stacks of membranes on either side of the telescope. Credit: NASA/Chris Gunn

“There is nothing really analogous to what we are trying to achieve with the folding up of a tennis court-sized sunshield, but it is similar to packing a parachute,” said Jeff Cheezum, a lead sunshield design engineer at Northrop Grumman. “Just like a skydiver needs their parachute packed correctly in order to open perfectly and to successfully get back to Earth, Webb needs its sunshield to be perfectly stowed to ensure that it also opens up perfectly and maintains its shape, in order to successfully keep the telescope at its required operating temperature.”

The month-long process of folding the sunshield began with laying the five layers as flat as possible. In its deployed state, the sunshield resembles a multilayered silver ship, so its inherently curved surfaces added a degree of complexity to this step. Afterwards, the layers were lifted vertically and propped onto special support equipment so that they could be properly restrained for folding. A team of technicians then carefully folded each layer in a zigzag pattern to create accordion-like stacks of membranes on either side of the telescope.

The first layer of the sunshield is two-thousandths of an inch (0.005 centimeters) thick, while the other four layers are only one-thousandth of an inch thick. For the team, a built-in challenge was the delicacy of folding such thin layers. The folding process also had to account for components such as the sunshield’s 90 different tensioning cables, which must be stowed in a specific manner to ensure the sunshield deploys smoothly.

With the successful completion of sunshield folding, the engineering team has prepared the sunshield for its complex deployment in space. The sunshield will unfold at the end of the telescope’s first week in space after launch, stretching out to its full size and then separating and tensioning each of its five layers. Testing for this unfolding and tensioning procedure was completed for the final time on Earth in December 2020.

“Think of it backwards; we want the deployed sunshield to achieve a specific shape so we get the performance we need. The whole folding process was designed with that in mind. We have to fold cleanly and carefully the same way each time, to ensure the unfolding occurs exactly the way we want it,” said James Cooper, lead sunshield engineer at NASA’s Goddard Space Flight Center in Greenbelt, Maryland.

For instance, one of the most intricate aspects of the folding process involved aligning the membrane stacks. Each of the sunshield’s layers has hundreds of intentional holes, which are deliberately arranged to avoid light and heat from passing to the optical elements of the telescope when the sunshield is fully deployed. These holes must be lined up during folding so that Webb technicians can insert “pins” through the holes in each membrane stack. The 107 “pins,” or membrane release devices, will help restrain the layers for launch, but release to unfold the sunshield once the telescope is in space. 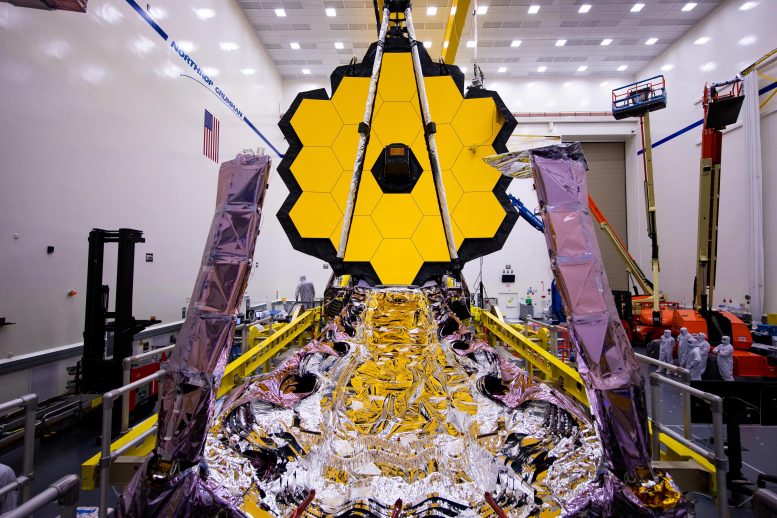 “It’s a very methodical process that we use to make sure everything is aligned correctly,” said Marc Roth, mechanical engineering lead at Northrop Grumman. “Our team has been through multiple training cycles, and we’ve implemented many lessons learned from the previous times we’ve done this process, all culminating in this last sunshield fold.”

The observatory will additionally undergo a final mirror deployment before it is shipped to its launch site in French Guiana, South America.

The Webb engineering team continues to follow personal safety procedures in accordance with current Centers for Disease Control and Prevention and Occupational Safety and Health Administration guidance related to COVID-19, including mask-wearing and social distancing.

The James Webb Space Telescope will be the world’s premier space science observatory when it launches in 2021. Webb will solve mysteries in our solar system, look beyond to distant worlds around other stars, and probe the mysterious structures and origins of our universe and our place in it. Webb is an international program led by NASA with its partners, ESA (European Space Agency) and the Canadian Space Agency.

‘The world is getting scarier’: How climate change multiplies risk