NASA’s Nancy Grace Roman Space Telescope will create enormous cosmic panoramas, helping us answer questions about the evolution of our universe. Astronomers also expect the mission to find thousands of planets using two different techniques as it surveys a wide range of stars in the Milky Way.

Roman will locate these potential new worlds, or exoplanets, by tracking the amount of light coming from distant stars over time. In a technique called gravitational microlensing, a spike in light signals that a planet may be present. On the other hand, if the light from a star dims periodically, it could be because there is a planet crossing the face of a star as it completes an orbit. This technique is called the transit method. By employing these two methods to find new worlds, astronomers will capture an unprecedented view of the composition and arrangement of planetary systems across our galaxy.

Scheduled for launch in the mid-2020s, Roman will be one of NASA’s most prolific planet hunters. 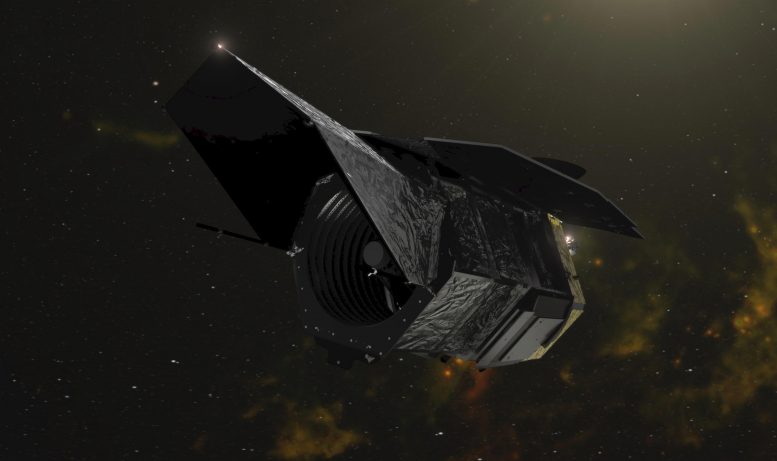 The mission’s large field of view, exquisite resolution, and incredible stability will provide a unique observational platform for discovering the tiny changes in light required to find other worlds via microlensing. This detection method takes advantage of the gravitational light-bending effects of massive objects predicted by Einstein’s general theory of relativity.

It occurs when a foreground star, the lens, randomly aligns with a distant background star, the source, as seen from Earth. As the stars drift along in their orbits around the galaxy, the alignment shifts over days to weeks, changing the apparent brightness of the source star. The precise pattern of these changes provides astronomers with clues about the nature of the lensing star in the foreground, including the presence of planets around it.

Many of the stars Roman will already be looking at for the microlensing survey may harbor transiting planets.

“Microlensing events are rare and occur quickly, so you need to look at a lot of stars repeatedly and precisely measure brightness changes to detect them,” said astrophysicist Benjamin Montet, a Scientia Lecturer at the University of New South Wales in Sydney. “Those are exactly the same things you need to do to find transiting planets, so by creating a robust microlensing survey, Roman will produce a nice transit survey as well.”

In a 2017 paper, Montet and his colleagues showed that Roman – formerly known as WFIRST ­– could catch more than 100,000 planets passing in front of, or transiting, their host stars. Periodic dimming as a planet repeatedly crosses in front of its star provides strong evidence of its presence, something astronomers typically have to confirm through follow-up observations.

The transit approach to finding exoplanets has been wildly successful for NASA’s Kepler and K2 missions, which have discovered about 2,800 confirmed planets to date, and is currently used by NASA’s Transiting Exoplanet Survey Satellite (TESS). Since Roman will find planets orbiting more distant, fainter stars, scientists will often have to rely on the mission’s expansive data set to verify the planets. For example, Roman might see secondary eclipses – small brightness dips when a planetary candidate passes behind its host star, which could help confirm its presence.

The twin detection methods of microlensing and transits complement each other, allowing Roman to find a diverse array of planets. The transit method works best for planets orbiting very close to their star. Microlensing, on the other hand, can detect planets orbiting far from their host stars. This technique can also find so-called rogue planets, which are not gravitationally bound to a star at all. These worlds can range from rocky planets smaller than Mars to gas giants.

Roughly three quarters of the transiting planets Roman will find are expected to be gas giants like Jupiter and Saturn, or ice giants like Uranus and Neptune. Most of the remainder will likely be planets that are between four and eight times as massive as Earth, known as mini-Neptunes. These worlds are particularly interesting since there are no planets like them in our solar system.

Some of the transiting worlds Roman captures are expected to lie within their star’s habitable zone, or the range of orbital distances where a planet may host liquid water on its surface. The location of this region varies depending on how large and hot the host star is – the smaller and cooler the star, the closer in its habitable zone will be. Roman’s sensitivity to infrared light makes it a powerful tool for finding planets around these dimmer orange stars.

Roman will also look farther out from Earth than previous planet-hunting missions. Kepler’s original survey monitored stars at an average distance of around 2,000 light-years. It viewed a modest region of the sky, totaling about 115 square degrees. TESS scans nearly the entire sky, however it aims to find worlds that are closer to Earth, with typical distances of around 150 light-years. Roman will use both the microlensing and transit detection methods to find planets up to 26,000 light-years away. 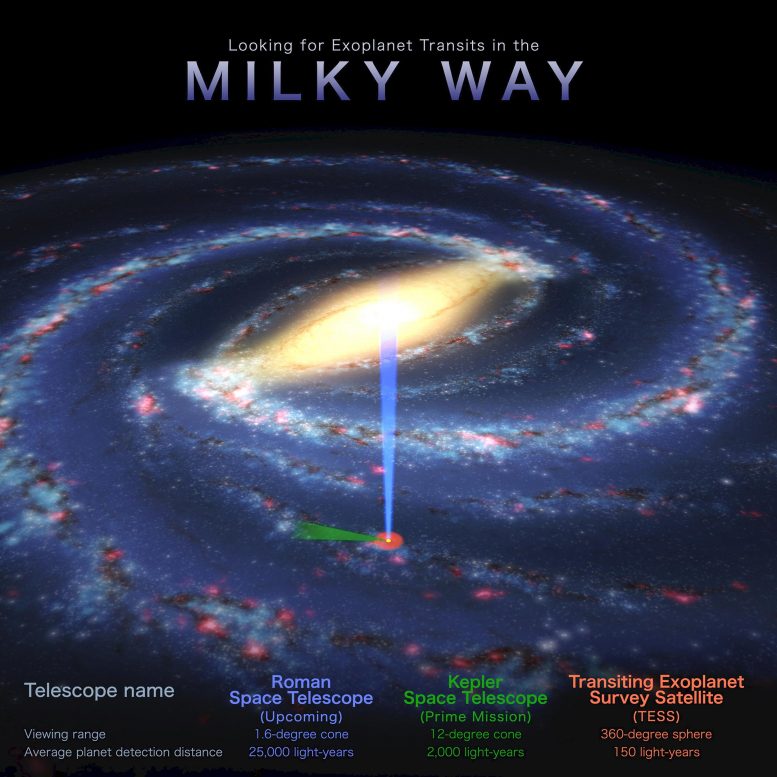 This graphic highlights the search areas of three planet-hunting missions: the upcoming Nancy Grace Roman Space Telescope, the Transiting Exoplanet Survey Satellite (TESS), and the retired Kepler Space Telescope. Astronomers expect Roman to discover roughly 100,000 transiting planets, worlds that periodically dim the light of their stars as they cross in front of them. While other missions, including Kepler’s extended K2 survey (not pictured in this graphic), have unveiled relatively nearby planets, Roman will reveal a wealth of worlds much farther from home. Credit: NASA’s Goddard Space Flight Center

Combining the results from Roman’s microlensing and transiting planet searches will help provide a more complete planet census by revealing worlds with a wide range of sizes and orbits. The mission will offer the first opportunity to find large numbers of transiting planets located thousands of light-years away, helping astronomers learn more about the demographics of planets in different regions of the galaxy.

“The fact that we’ll be able to detect thousands of transiting planets just by looking at microlensing data that’s already been taken is exciting,” said study co-author Jennifer Yee, an astrophysicist at the Center for Astrophysics | Harvard & Smithsonian in Cambridge, Massachusetts. “It’s free science.”

Astronomers find the ‘safest place’ to live in the Milky Way

Climate Change Has Cut Global Agricultural Productivity by 21% Since 1961