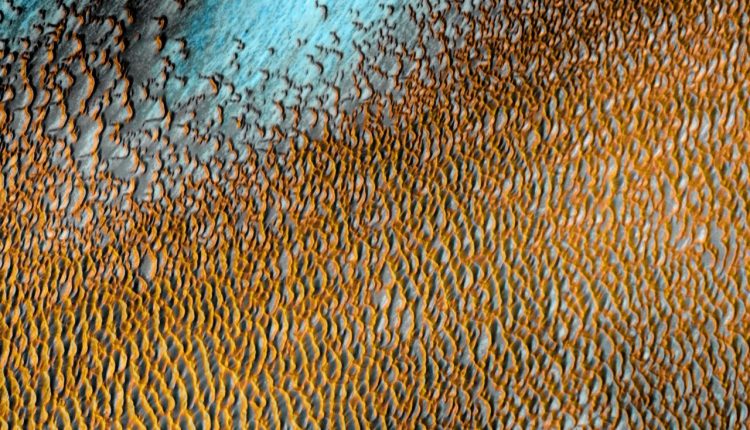 NASA’s 2001 Mars Odyssey spacecraft launched 20 years ago on April 7, making it the oldest spacecraft still working at the Red Planet. The orbiter, which takes its name from Arthur C. Clarke’s classic sci-fi novel “2001: A Space Odyssey” (Clarke blessed its use before launch), was sent to map the composition of the Martian surface, providing a window to the past so scientists could piece together how the planet evolved.

But it’s done far more than that, uncovering troves of water ice, serving as a crucial communications link for other spacecraft, and helping to pave the way not just for safer landings but also future astronauts.

Odyssey’s two decades of data have been a boon for researchers working to determine where water ice is locked up on the planet. Understanding the water cycle on Mars—a planet that was once much wetter, like Earth—offers insights into the way it has changed over time: How does water move around the planet today? Does the tilt of the planet affect where ice is stable? Odyssey’s discoveries have helped chip away at those questions.

“Before Odyssey, we didn’t know where this water was stored on the planet,” said Project Scientist Jeffrey Plaut of NASA’s Jet Propulsion Laboratory in Southern California, which leads the Odyssey mission. “We detected it for the first time from orbit and later confirmed it was there using the Phoenix lander.”

Stores of water ice are also needed to help astronauts survive on Mars and to provide fuel for their spacecraft. (In fact, astronauts were the focus of an instrument aboard Odyssey that measured how much space radiation they would have to contend with before it stopped working in 2003.) The orbiter finds the water ice using its gamma-ray spectrometer (GRS) detector, which has proven to be a capable hunter of near-surface hydrogen—a proxy for water ice. The GRS measures the amount of different elements on the Martian surface and also serves as a node in NASA’s interplanetary gamma-ray burst (GRB) detection network, which identifies source locations of GRB’s for follow-up astronomical observations.

What Mars is made of

Look at almost any mapping study of the Martian surface, and it probably includes Odyssey data. For many years, the most complete global maps of Mars were made using Odyssey’s infrared camera, called the Thermal Emission Imaging System, or THEMIS. The camera measures the surface temperature day and night, allowing scientists to determine what physical materials, such as rock, sand, or dust, exist. Its data reveals the presence of these materials based on how they heat up or cool down over the course of a Martian day.

The net effect of two decades’ worth of all that mapping? Scientists haven’t just used the data to map valley networks and craters, they’ve also been able to spot sandstone, iron-rich rocks, salts, and more—findings that help lend deeper insight to Mars’ story. “It’s hard to overstate how the THEMIS global map has filled gaps in our knowledge,” said Laura Kerber of JPL, Odyssey’s deputy project scientist.

THEMIS has sent back more than 1 million images since it began circling Mars. The images and maps it’s produced highlight the presence of hazards, such as topographic features and boulders, but they also help ensure the safety of future astronauts by showing the location of resources such as water ice. This aids the Mars science community and NASA in deciding where to send landers and rovers—including the Perseverance rover, which touched down on Feb. 18, 2021.

From early on, Odyssey has served as a long-distance call center for NASA’s rovers and landers, sending their data back to Earth as part of the Mars Relay Network. The idea of Mars relay goes back to the 1970’s, when the two Viking landers sent science data and images through an orbiter back to Earth. An orbiter can carry radios or antennas capable of sending back more data than a surface spacecraft. But Odyssey made the process routine when it began conveying data to and from NASA’s Spirit and Opportunity rovers.

Each day, the rovers could go somewhere new and send fresh images back to Earth. Through a relay like Odyssey, scientists got more data sooner, while the public got more Mars images to be excited over. Odyssey has supported over 18,000 relay sessions. These days, it shares the communications task with NASA’s Mars Reconnaissance Orbiter and MAVEN, along with the ESA (European Space Agency) Trace Gas Orbiter.

Odyssey has done such a thorough job of studying the Martian surface that scientists have started turning its THEMIS camera to capture unique views of Mars’ moons Phobos and Deimos. As with the Martian surface, studying each moon’s thermophysics helps scientists determine the properties of materials on their surfaces. Such information can offer glimpses into their past: It’s unclear whether the moons are captured asteroids or chunks of Mars, blasted off the surface by an ancient impact.

Future missions, like the Japanese Space Agency’s Martian Moons eXploration (MMX) spacecraft, will seek to land on these moons. In the distant future, missions might even create bases on them for astronauts. And if they do, they’ll rely on data from an orbiter that began its odyssey at the start of the millennium.

THEMIS was built and is operated by Arizona State University in Tempe. Odyssey’s Gamma Ray Spectrometer was provided by the University of Arizona, Tucson, Los Alamos National Laboratory, and the Russian Space Research Institute. The prime contractor for the Odyssey project, Lockheed Martin Space in Denver, developed and built the orbiter. Mission operations are conducted jointly from Lockheed Martin and from JPL, a division of Caltech in Pasadena.