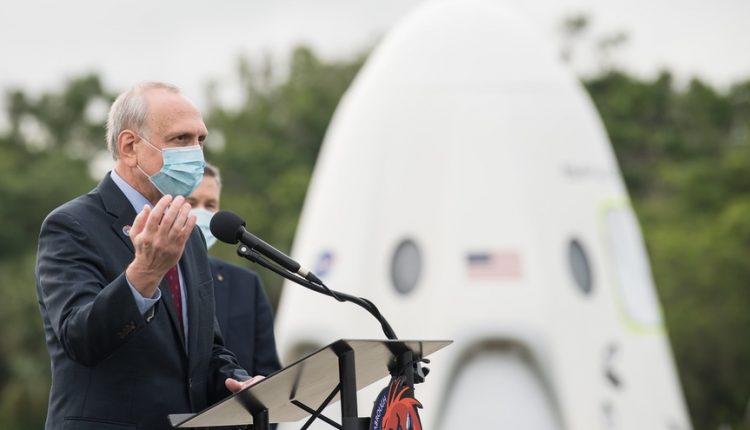 KENNEDY SPACE CENTER, Fla. — NASA’s acting head says the agency’s relationship with Russia remains good despite comments by Russian officials in recent days that the country could abandon the International Space Station as soon as 2025.

Yuri Borisov, Russian deputy prime minister, said on Russian television April 18 that Russia could withdraw from the ISS partnership in 2025. He cited increasing problems with the station as a reason for considering leaving the station, but said Russia would first perform a “technical inspection” and that the other partners would be “fairly notified” about its decision.

Officials since backed off from a firm 2025 date for exiting the ISS partnership, but have talked about proposals to develop a Russian national space station as its successor to the ISS. Dmitry Rogozin, director general of Roscosmos, said April 21 his agency plans to revise a research and power module originally intended for the Russian segment of the ISS in the mid-2020s, turning it into the core module of a standalone Russian station that could be complete in 2030.

If Russia were to exit the ISS partnership, it would put the future of the station in jeopardy. The station relies on Russian modules and resources, which may be difficult and expensive to replace should Russia depart.

For now, NASA is not publicly concerned about a Russian departure from the ISS partnership. “We still have a very, very, really strong relationship with Roscosmos and Russia on ISS,” Steve Jurczyk, NASA acting administrator, said at an April 21 media event here when asked about Borisov’s comments. “It’s important and it’s critical for the continued safe and effective operations of ISS.”

He said all of the station’s partners are considering plans for the future of the station. “I haven’t had any discussions with Russia or Roscosmos on their plans,” he said. “They’ll do their work and decide what they want to do and we’ll make our decisions on our side with our partners.”

Despite comments about leaving the ISS as soon as 2025, Russia is still moving ahead with work to augment its segment of the station. A multipurpose lab module called Nauka is scheduled for launch July 15 after many years of delays, said Frank de Winne, manager of the ISS program at the European Space Agency.

Nauka includes a European robotic arm that ESA astronauts on the ISS, including Thomas Pesquet, who is part of the upcoming Crew-2 mission, will help commission. The arm will support scientific research on the station’s exterior and relocation of modules on the Russian segment. “It shows the strength of the partnership that we have across the ocean and with our Russian colleagues,” he said.

NASA is also working to complete an agreement with Russia to swap seats on commercial crew vehicles with those on Soyuz spacecraft. Jurczyk said NASA is finalizing with the State Department the “implementing agreement” with Russia for exchanging seats. That will allow NASA astronauts to continue to fly on Soyuz, while Russian cosmonauts fly on Crew Dragon and CST-100 Starliner commercial crew vehicles.

It is increasingly unlikely, though, that the agreement will be done in time to allow a Russian cosmonaut to fly on the Crew-3 commercial crew mission, launching in October. NASA had set aside a seat on that mission for potential use by a Russian cosmonaut if an agreement is reached. The other three seats have already been assigned to NASA and ESA astronauts.

“We haven’t completely given up on having a cosmonaut on Crew-3, but at this point, given the schedule, it would be really, really challenging to complete all the training and get the suit fitted and done for a cosmonaut on Crew-3,” Jurczyk said. “Crew-4 is looking more likely right now.”

If a cosmonaut isn’t able to fly on Crew-3, he said an astronaut from NASA or another ISS partner would take that seat.

A delay in that agreement adds to the complications regarding access to Soyuz seats. NASA took an unusual approach to obtaining the seat on the Soyuz MS-18 spacecraft that launched to the station April 9, working with a third party, commercial spaceflight company Axiom Space. Axiom purchased the seat from Roscosmos and then swapped it with NASA in exchange for a seat on a future commercial crew mission.

That seat allowed NASA astronaut Mark Vande Hei to fly on Soyuz MS-18. Crew rotations are normally six months long, but Russian plans to fly a film director and actress on the next Soyuz mission in October for a short-duration stay mean that Vande Hei could be on the station for as long as a year.

That could, as it turns out, help NASA by eliminating the need to acquire a seat on that October Soyuz mission. “We’ll work through whether there’s an opportunity for Mark to extend to a year, or if we need to do something else to ensure that we have crew on the USOS for safe operations,” he said, referring to the U.S. Orbital Segment of the station.

The Russian statements about leaving the ISS did not come up during an April 21 Senate Commerce Committee confirmation hearing for Bill Nelson, the White House’s nominee for NASA administrator. Senators paid more attention to China’s space exploration plans and the perceived threat they posed to the United States, and Nelson’s response tangentially included Russia.