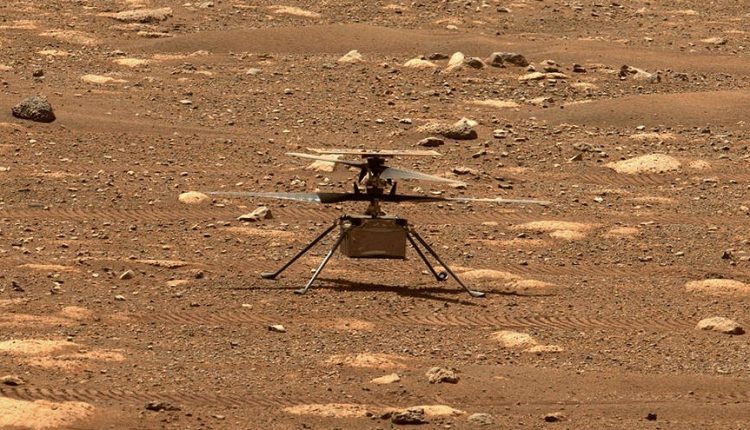 WASHINGTON — NASA announced April 10 it was postponing the first flight attempt of the Ingenuity helicopter on Mars by at least three days after detecting a problem during a final pre-flight test.

In a brief statement, NASA said that the command sequence for an April 9 test of the vehicle’s rotors, where they would spin up to full speed, ended early when a “watchdog” timer expired. That timer oversees the command sequence and prevents the test from proceeding if there is an issue.

NASA did not elaborate on the specific issue that aborted the test, beyond that it took place when the flight computer on the 1.8-kilogram helicopter was trying to go from “pre-flight” to “flight” mode. Mission engineers will reschedule the test once they evaluate the telemetry from the vehicle.

That test was the last before a first flight of Ingenuity, which was scheduled for the evening of April 11. NASA says that flight attempt will now take place no earlier than April 14.

“It’s going to be a very careful flight,” said Tim Canham, Ingenuity operations lead at NASA’s Jet Propulsion Laboratory, during an April 9 briefing. The helicopter will fly to an altitude of three meters and hover, rotating in the direction of the Perseverance rover that will be observing the flight from a safe distance of about 65 meters. The helicopter will then descend and land, about 40 seconds after takeoff.

“We are going to be taking a very conservative flight to really nail the first flight,” said MiMi Aung, project manager for Ingenuity at JPL. “After that, we’ll be taking bolder and bolder flights. We’ll be going higher and further.”

The mission has five flights planned over a 30-day period. After each flight engineers will review telemetry from Ingenuity, as well as images from both the helicopter itself and from Perseverance. That process will take a couple of days given the volume of data, particularly snippets of video that project officials hope will show Ingenuity in flight. “We are just taking all the downlink we can get from all the orbiters so we can get back as much as possible,” said Elsa Jensen, the uplink operations lead for the Mastcam-Z camera on Perseverance, which will observe the flight.

If the first flight is a success, Aung said they expect to perform the second flight in four days. That will decrease to a three-day cadence for subsequent flights. Those later flights will include going to altitudes of up to five meters and going 50 meters downrange and back.

“Once we get to the fourth and fifth flights, we’ll have fun,” she said. “We really want to push our vehicle to the limit. It’s not every day you get to test a rotorcraft and do an experiment on Mars. After the third flight, we’re going to be very adventurous.”

By that fifth flight, she said the mission will take more risks with the vehicle with a greater probability that the vehicle will not survive. That’s to maximize the value of this technology demonstration, but also reflects that Ingenuity has a fixed 30-day period to conduct those tests before the main Perseverance mission has to proceed. Ingenuity relies on Perseverance as a data relay and cannot operate without it.

“Even if it survives, we are going to turn back the keys to the rover team,” she said. “Ken Farley, the project scientist for Perseverance, has been so generous. He gave us 30 invaluable days on Mars, and then Perseverance really must go on to the primary mission it is on.”

During development of Ingenuity, engineers tested it in conditions simulating the reduced gravity and tenuous atmosphere of Mars. Up until the issue before its final pre-flight test, the vehicle had been operating well, deploying itself from the underside of Perseverance and then charging its batteries using a small solar panel and briefly testing its rotors at low speed.

Aung said that gave her confidence in the chances of success on that first flight. “The only uncertainty remains the actual environment of Mars,” she said, in particular winds that have been averaging about six meters per second. She noted, though, that Ingenuity was tested on Earth in winds up to 11 meters per second, and simulations show the helicopter’s control system can handle winds approaching 30 meters per second.

“We’re really excited. It could be an amazing day,” Canham said of the first flight. “We’re all nervous, but we have confidence that we put in the work and time, and that we have the right people to do the job.”