Like Boot Prints on the Moon, NASA’s OSIRIS-REx Left Its Mark on Asteroid Bennu 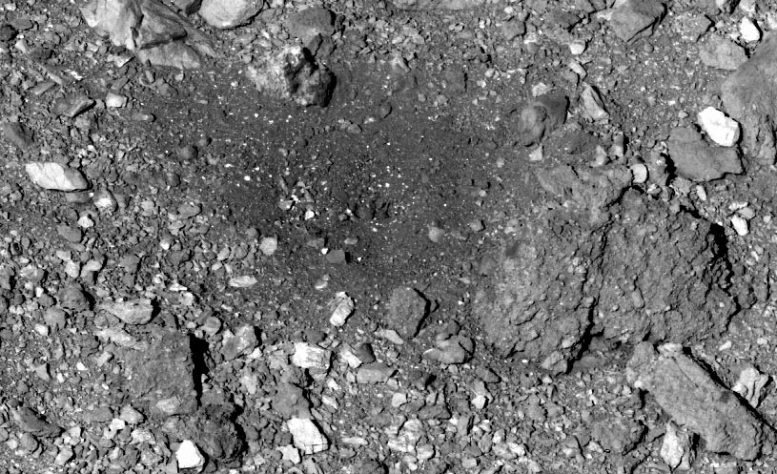 This image sequence shows how the local surface of Bennu changed after the OSIRIS-REx spacecraft successfully performed its Touch-And-Go (TAG) sample acquisition maneuver on October 20, 2020. The earlier image (top) was taken on March 7, 2019, by the spacecraft’s PolyCam instrument, as part of the mission’s global mapping campaign. The bottom image was taken on April 7, 2021, as part of a final observation campaign to document the state of the surface after TAG. Sample site Nightingale is located in the relatively clear patch just above the crater’s center – visible in the center of the earlier image. The large, dark boulder located at the center right measures 43 feet (13 meters) on its longest axis. Credit: NASA/Goddard/University of Arizona

Like boot prints on the Moon, NASA’s OSIRIS-REx spacecraft left its mark on asteroid Bennu. Now, new images — taken during the spacecraft’s final fly-over on April 7, 2021 — reveal the aftermath of its historic encounter with the asteroid.

The spacecraft flew within 2.3 miles (3.7 km) of the asteroid — the closest it has been since the Touch-and-Go, or TAG, sample collection event on October 20, 2020. During TAG, the spacecraft’s sampling head sunk 1.6 feet (48.8 centimeters) into the asteroid’s surface and simultaneously fired a pressurized charge of nitrogen gas, churning up surface material and driving some into the collection chamber. The spacecraft’s thrusters also launched rocks and dust during the maneuver to reverse course and safely back away from the asteroid.

Comparing the two images reveals obvious signs of surface disturbance. At the sample collection point, there appears to be a depression, with several large boulders evident at the bottom, suggesting that they were exposed by sampling. There is a noticeable increase in the amount of highly reflective material near the TAG point against the generally dark background of the surface, and many rocks were moved around.

Where thrusters fired against the surface, substantial mass movement is apparent. Multiple sub-meter boulders were mobilized by the plumes into a campfire ring–like shape — similar to rings of boulders seen around small craters pocking the surface.

Bennu’s surface was disturbed in three different ways: by the force of the spacecraft touching down; by the sampling mechanism, which collected material by blowing gas into its collection filter; and by four of the spacecraft’s back-away thrusters, which moved the spacecraft away from the sample site (marked with a red “X” in the second of these two images) and agitated dust and boulders on the surface. The image above shows the TAG site and highlights (red circle) a large boulder thrown about 40 feet (about 12 meters). Credit: NASA/Goddard/University of Arizona

Jason Dworkin, the mission’s project scientist at NASA’s Goddard Space Flight Center in Greenbelt, Maryland, noticed that one boulder measuring 4 feet (1.25 meters) across on the edge of the sampling site seemed to appear only in the post-TAG image. “The rock probably weighs around a ton, with a mass somewhere between a cow and a car.”

Dante Lauretta, of the University of Arizona and the mission’s principal investigator, later pointed out that this boulder is likely one of those present in the pre-TAG image, but much nearer the sampling location, and estimates it was thrown a distance of 40 feet (about 12 meters) by the sample collection event.

In order to compare the before and after images, the team had to meticulously plan this final flyover. “Bennu is rough and rocky, so if you look at it from a different angle or capture it at a time when the sun is not directly overhead, that dramatically changes what the surface looks like,” says Dathon Golish, a member of the OSIRIS-REx image processing working group, headquartered at the University of Arizona. “These images were deliberately taken close to noon, with the Sun shining straight down, when there’s not as many shadows.”

“These observations were not in the original mission plan, so we were excited to go back and document what we did,” Golish said. “The team really pulled together for this one last hurrah.”

The spacecraft will remain in Bennu’s vicinity until departure on May 10, when the mission will begin its two-year return cruise back to Earth. As it approaches Earth, the spacecraft will jettison the Sample Return Capsule (SRC) that contains the sample from Bennu. The SRC will then travel through Earth’s atmosphere and land under parachutes at the Utah Test and Training Range on Sept. 24, 2023.

Once recovered, the capsule will be transported to the curation facility at NASA’s Johnson Space Center in Houston, where the sample will be removed for distribution to laboratories worldwide, enabling scientists to study the formation of our solar system and Earth as a habitable planet. NASA will set 75% of the sample aside for future generations to study with technologies not invented yet.

The OSIRIS-REx mission is the first NASA mission to visit a near-Earth asteroid, survey the surface, and collect a sample to deliver to Earth.

NASA’s Goddard Space Flight Center in Greenbelt, Maryland, provides overall mission management, systems engineering, and the safety and mission assurance for OSIRIS-REx. Dante Lauretta of the University of Arizona, Tucson, is the principal investigator, and the University of Arizona also leads the science team and the mission’s science observation planning and data processing. Lockheed Martin Space in Denver built the spacecraft and provides flight operations. Goddard and KinetX Aerospace are responsible for navigating the OSIRIS-REx spacecraft. OSIRIS-REx is the third mission in NASA’s New Frontiers Program, which is managed by NASA’s Marshall Space Flight Center in Huntsville, Alabama, for the agency’s Science Mission Directorate in Washington, D.C.