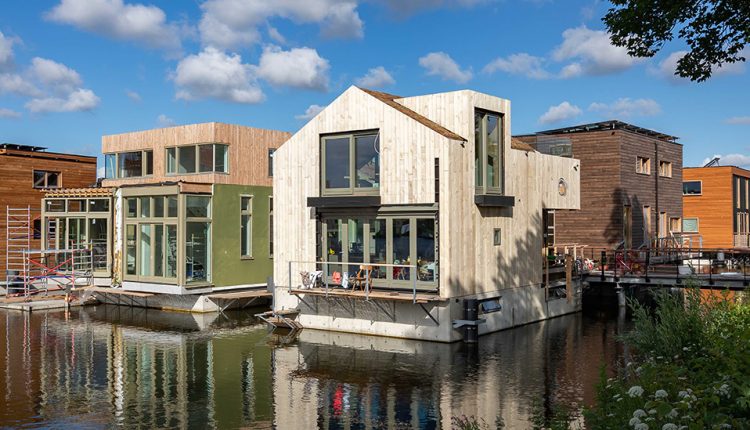 How can people live in harmony with global warming and rising water levels? In Amsterdam, a group of forward-thinking people decided to go with the flow. Schoonschip, a self-sustaining floating community of more than 100 residents, boasts innovative technology like 500 solar panels and a green roof on every house. This brave and fascinating experiment demonstrates how humans can adapt to the changing planet while forging stronger communities.

TV director Marjan de Blok got the idea for the floating neighborhood after working on a documentary about a floating home. She and some friends began to brainstorm. “We are a bottom-up initiative built by the people that live here,” she told Inhabitat in an email. “Not owned / started / sold by a company / architect. For us this is important and it’s the biggest strength of the project.” Schoonschip has already received tons of press, not all of it accurate, de Blok said. “We don’t use grey water to water our plants, we don’t grow food on our roofs and we don’t use the jouliette to pay electricity with. These are just a couple of things that are not true but have been spread and copied.”

Related: This home floats in a self-sufficient Amsterdam neighborhood

Instead, graywater is used for showers, washing machines, drainage and dishwashers. “Black water,” i.e. human waste, will be fermented and transformed into energy at a biorefinery, in partnership with a water supplier called Waternet. For other accurate details of Schoonship design and technology, de Blok recommends this article from GB&D.

Inhabitat talked to three residents to get an inside look at what it’s like to call a floating village home.

Marjan de Blok, resident since May 2019

Inhabitat: How did you get the idea for Schoonship?

It started when I was making a short documentary about a sustainable floating house about 11 years ago. I completely fell in love with the concept of living on the water, as sustainable as possible. It gave me a great feeling of freedom and it seemed like the answer to a lot of challenges we were facing and still are facing. At the same time, I realized that building a house like this, as sustainable as this, would take a lot of money and effort. That’s how the idea was born to start a group, build more houseboats, to make a bigger impact. I started to talk to some friends and every single one of them was so enthusiastic, that we said let’s go for it. At that time our plan was more simple than what it turned out to be today. The project grew and grew and the sustainable possibilities developed, so we just grew along and here we are with 46 households living in this sustainable neighborhood, inspiring people worldwide.

Schoonschip consists of 46 houses and one collective space that we realized with the group and that we use for all kinds of purposes. In total there are 30 water lots. So some of the lots you see are inhabited by two households. They have their own house, on a shared lot. One of the lots is even inhabited by three families. We were a foundation and now a homeowners association.

How has your life changed since moving to Schoonschip?

For me personally my life changed completely. I moved from a top floor small apartment in the busy west of Amsterdam to the north. Living on the water means living with the weather. But the biggest change for me is the social part. Sharing a village or neighborhood with people that you know is a big change compared to living in a house in a street where you hardly know any neighbor.

Now, in winter, especially now with the lockdown going on, it might seem a bit quiet, but in summertime it’s wild. Everybody is swimming and playing. Kids rule the jetty.

What else should we know?

The project didn’t finish when we moved here. Our goal is to inspire and inform people worldwide to try and play a role in a more sustainable way of living and to become part of development of the area that they live in.

What have been the biggest adjustments to moving to Schoonschip?

That we are responsible for our own house and all the technical things about the solar collectors, the warm heat pump, the charger, etc. This was rather new for me so I had to deepen my knowledge about sustainable techniques.

What do you like the most about living there?

I like our house and the feeling to live so close to the water. But most of all I like to live in a community like this. It is a little village. We know each other rather well. Everyone is friendly, helpful and supportive of each other.

What do you miss about traditional on-land housing?

Could you describe the qualities a person needs to thrive at Schoonschip?

We have a lot of different people in the community. So the differences are very charming and needed. But in common, 1. Interest in sustainability, feel the importance of understanding, to share innovation and new ideas. 2. To be open to live with other people around you and willing to invest in the social aspects.

What have been the biggest adjustments to moving to Schoonschip?

We were living in a small downtown apartment with kids, so ever since we live here it feels like we’ve rented a super fancy holiday home — without having to leave! The comfort of living and the quality of light in the houseboat is incredible. It was quite easy to adjust to this actually…

Practically, the biggest adjustment was getting rid of our car. Within Schoonschip, we’ve set up a car-sharing system with electric vehicles and most Schoonschippers joined the group. Prior to the switch, this felt like a big adjustment, but it wasn’t as much of a deal as we expected. It’s quite relaxed to not have the usual car ownership issues. Before we moved we did a CO2 footprint analysis of our household; we were already vegetarians and moving to an energy-neutral house, by far the biggest polluting aspect of our lives would be transportation. Realizing this, the choice to move to electric car-sharing was a no-brainer.

The environmental sustainability aspect of living at Schoonschip is great, but to me, the social sustainability is much more special and rewarding on a personal level. The project has run 13 years from initiation to completion and together we’ve worked very hard at achieving our goals. Everybody in the community participated and we’ve gotten to know each other really well. Some people left the project along the way, but many stayed. The people that are still in the project are all very different, but they also seem to share a mentality of resilience, openness and forgiveness toward each other. Nice people to be around with!

What do you miss about traditional housing?

We don’t have a shed, so DIY work is a bit of a hassle. We added a small floating garden to the boat which produces vegetables and even has a generous pear tree on it!