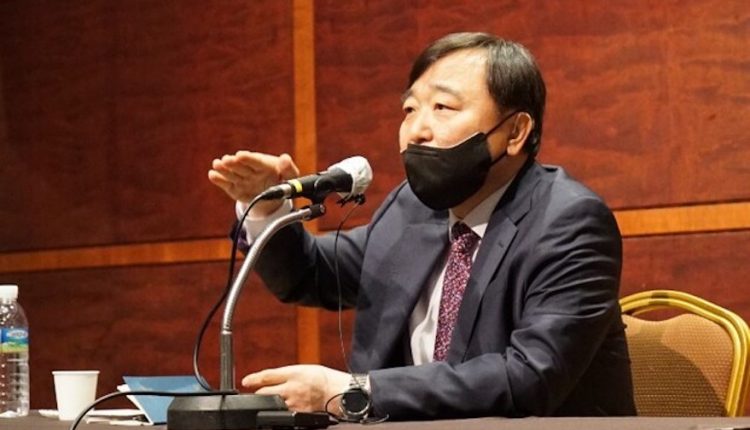 Space will command nearly 45 percent of 2.2 trillion won the company has set aside for a broader five-year growth plan, which also includes the development of electric and hydrogen aircraft, air defense electronics, simulations and software.

Under the plan, KAI is working on acquiring or forming a strategic partnership with undisclosed companies, in a move to launch ground station and satellite imagery analysis services in two or three years, said CEO Ahn Hyun-ho in a press conference here April 2. He said the company will announce details in August.

“We have set up a clear vision for our space business,” Ahn said. “It is something from which we can expect huge profit, but it takes a long time [to make it happen]. So we will approach it step by step and carefully.”

“We see increasing demand for medium- and large-sized satellites in the region,” Ahn said. “KAI has ample heritage in satellite development, which would give us a competitive advantage in exporting our satellites to the region.”

KAI has been a fixed member of South Korea’s government-driven satellite development projects since its inception in 1999, according to its website. The company also inherited satellite-making technologies and know-how from the Korea Aerospace Research Institute (KARI) in the process of developing CAS500-1, which was sent into orbit in March on a Russian Soyuz-2 rocket. KAI will take on a larger role in developing four follow-on 500-kilogram-class observation satellites by 2025, according to a KARI document.

As part of efforts to bolster its technological prowess, KAI joined hands with the Korea Advanced Institute and Science and Technology (KAIST), South Korea’s top tech university, in March to establish a space technology research center, in which the two organizations will carry out a range of projects on satellite system software, spacecraft and other future mobility vehicles until 2023. In August, KAI opened the nation’s first private large-scale satellite production facility in Sacheon, South Gyeongsang Province, capable of producing up to 20 small satellites simultaneously.

Ahn said “small satellite production itself is not so much a profitable business,” but the company has gone into it because of a “sizable value of data collected through small satellites that can be applied to numerous commercial services such as weather forecasting.”

“We will launch satellite data-based services as soon as possible,” Ahn said. He added the company is considering starting the services in Southeast Asia based on satellite imagery from Airbus.

Meanwhile, Hanwha Systems, another major South Korean aerospace company, will open its first office in the United States as part of efforts to “secure companies or technologies” that will help propel its satellite constellation project.

This was decided in the board of directors’ meeting March 23, along with raising 1.2 trillion won by issuing new shares in June, part of which will go to the project. The office’s location and other details remain undecided, according to a Hanwha spokesman. Reports have it that the office would be located in either Connecticut or Washington, D.C. While Connecticut is home to the U.S. office of Hanwha Aerospace, a sister company of Hanwha Systems, the Washington region is home to many space companies and their federal government customers.

On top of this, Hanwha Aerospace has decided to purchase 48.99 percent of Hanwha Systems’ new shares.

This cross-shareholding will help bolster business efficiency and cooperation between the two companies, according to industry observers.