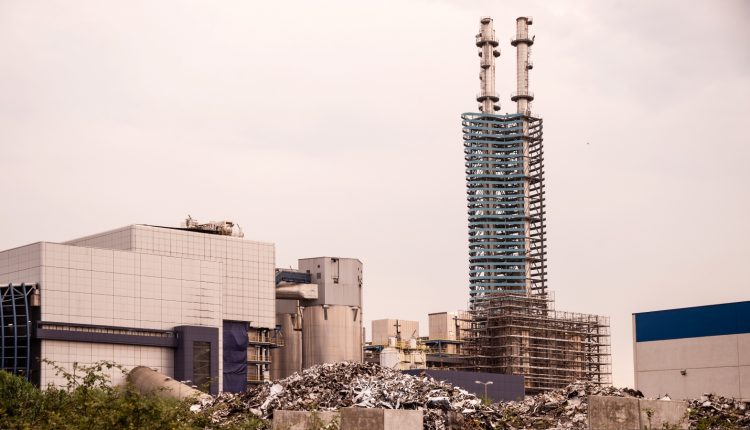 In Europe, a backlash is growing over incinerating garbage

This story was originally published by Yale Environment 360 and is reproduced here as part of the Climate Desk collaboration.

For decades, Europe has poured millions of tons of its trash into incinerators each year, often under the green-sounding label “waste to energy.” Now, concerns about incineration’s outsized carbon footprint and fears it may undermine recycling are prompting European Union officials to ease their long-standing embrace of a technology that once seemed like an appealing way to make waste disappear.

The EU is in the process of cutting off funding for new incinerators, but there’s little sign most existing ones —currently consuming 27 percent of the bloc’s municipal waste — will close any time soon. And, even without EU financial support, new plants are in the works, many in southern and eastern European countries that have historically incinerated less than long-standing waste-to-energy proponents such as Germany, the Netherlands, and the Scandinavian nations. Meanwhile, across the English Channel, post-Brexit Britain is charging ahead with proposals for dozens of new garbage-burning projects.

Without a more decisive change of course, critics argue, that adds up to an existential threat both to Europe’s promise to slash carbon emissions to net-zero by midcentury and its dreams of a “circular economy” in which reuse and recycling largely take the place of waste disposal.

“Burning plastic in a climate emergency, that’s insane,” said Georgia Elliott-Smith, an environmental engineer and Extinction Rebellion activist who is suing the British government over its decision to exclude incinerators from its new emissions trading system. Plastic, hard to recycle and ubiquitous in garbage, is made from fossil fuel derivatives and emits carbon dioxide when burned, accounting for a substantial chunk of incineration’s climate damage.

In a case scheduled to be heard in the High Court this month, Elliott-Smith contends Britain violated its Paris Agreement commitments by omitting the waste-to-energy sector from the market it created when it left the European greenhouse gas emissions trading system as part of its divorce from the E.U. While she also argues the new system is too weak to shrink Britain’s carbon footprint, including incinerators could, in principle, put a cost on their emissions.

Sinking billions of pounds into new incinerators now could lock Britain into decades of garbage-burning and make it harder for cash-strapped local authorities to boost recycling and composting rates, she said. The country already burns nearly 45 percent of its waste — more than it recycles, the Channel 4 show Dispatches recently reported. “The way incineration works, it skews the economics of waste by its very existence,” Elliott-Smith said. “Once you build the beast, you’ve got to keep feeding it.”

Worries that incinerators sicken those who live near them — disproportionately poor, and people of color — have long dogged the industry. Wealthy nations such as Sweden and Denmark, which rely heavily on waste-to-energy plants, say their sophisticated emissions treatment systems mean such concerns are misplaced. But critics note many nations lack the resources for the best pollution-control systems. Dangerous emissions such as dioxin and particulate matter sometimes go unreported, and enforcement is often porous, environmentalists say.

The stinkiest, dirtiest, nastiest renewable energy you never heard of

The climate concerns are newer, crystallized in a report the consulting firm Eunomia produced for ClientEarth, an advocacy group. It found that British incinerators’ power generation was more carbon-intensive than electricity from natural gas, and second only to coal. Overall, European incinerators pumped out an estimated 95 million tons of carbon dioxide in 2018, about 2 percent of total emissions.

That footprint helped prompt EU officials to drop incineration from a draft of important green investment guidelines, known as the “sustainable finance taxonomy,” expected to be formally adopted this month. Not only can trash-burning plants no longer get subsidies designated for environmentally beneficial projects, they have also been cut off from other major EU funding streams. And the European Parliament has urged member nations to minimize incineration.

“It looks like things are really changing in Brussels,” said Janek Vähk, a coordinator at Zero Waste Europe, a network of advocacy groups. Leaders, in his view, have “started understanding that incineration is a big source of greenhouse gases.”

For its part, the industry says it is unfair to compare its carbon emissions directly with those of plants whose main function is to generate power. “The primary reason why we exist is for waste treatment, not energy production,” said Agnė Razgaitytė, a spokeswoman for the Confederation of European Waste-to-Energy Plants, or CEWEP, an industry group. “So it’s not exactly comparable in the same way.”

Without incineration, she said, landfill costs tend to rise, increasing the danger of European trash leaving the continent, and ultimately being burned in uncontrolled settings or littering beaches and waterways. And landfills have their own climate impact — any organic waste in them generates the potent greenhouse gas methane as it decays. What’s more, incinerator operators salvage metals from the ash left over after burning, allowing their reuse.

“We’re at home in the circular economy,” Razgaitytė said. “We do give value to the waste that otherwise would be just lost.” No matter how much is recycled and composted, she added, there will always be something left over: “I don’t think the waste-to-energy sector as such is going out of business any time soon.”

The EU’s shift comes after a building spree that doubled EU countries’ municipal waste incineration between 1995 and 2019, to 60 million tons annually. Such plants now provide power to 18 million Europeans and heat to 15 million, the industry says.

Individual countries remain free to fund and commission new incinerators. Those plants still make money from waste-disposal fees and by selling electricity and, in some places, heat. In some countries, operators can still claim subsidies designed to support renewable energy, as long as they burn waste that has been collected in separate streams so recyclable or compostable material is not incinerated.

What’s more, Vähk warned, the EU’s aim for countries to landfill no more than 10 percent of municipal waste by 2035 will unintentionally bolster incinerators’ appeal. “There’s a lot of pressure on minimizing landfill,” he said. That’s worrying, “because we don’t want to move from landfilling to incineration.”

It all comes as the EU is pushing to reduce waste, particularly plastic, by ratcheting up targets for composting and recycling, mandating that plastic bottles contain 30 percent recycled content by 2030, and banning — as of this July — single-use items such as cutlery, cups, and stirrers. The EU has also adopted a new “circular economy” plan that aims in the longer term to encourage better product design so reuse and recycling are easier.

Continued incineration, critics argue, could threaten those goals. Once built, they say, incinerators cannibalize recycling, because municipal governments are often locked in by contracts that make it cheaper to get their rubbish burned than to sort it for recyclers.

One nation now grappling with the legacy of its long embrace of incineration is Denmark. The country, one of Europe’s biggest waste producers, built so many incinerators that by 2018 it was importing a million tons of trash. The plants generate 5 percent of the country’s electricity and nearly a quarter of the heat in the local networks, known as district heating systems, said Mads Jakobsen, chairman of the Danish Waste Association, which represents municipal authorities and waste companies.

Pushing to meet ambitious carbon-cutting goals, Danish lawmakers agreed last year to shrink incineration capacity by 30 percent in a decade, with the closure of seven incinerators, while dramatically expanding recycling. “It’s time to stop importing plastic waste from abroad to fill empty incinerators and burn it to the detriment of the climate,” said Dan Jørgensen, the country’s climate minister.

But in focusing only on Denmark’s own carbon footprint, Jakobsen said, the country’s politicians had failed to consider what would happen to the waste Denmark turns away. And with loan repayments still due on many plants, he said, “I’m also concerned about the stranded costs. Who’s going to answer for those costs? Will it be the citizens in my municipality?”

Two regions of Belgium are also seeking to reduce incineration capacity. But few other parts of Europe are following suit. Indeed, some countries are planning new plants. Greece, Bulgaria, and Romania landfill most of their waste, and will probably need more incineration capacity, said Razgaitytė. Italy and Spain are among the others that may also build new plants, she said.

A zombie garbage incinerator divides a working-class town in Massachusetts.

In central and eastern Europe, “there is very strong pressure and a lucrative market for new incinerators,” said Paweł Głuszyński, of the Society for Earth, a Polish advocacy group. Poland has about nine incinerators now, plus a similar number of cement plants that use processed waste as fuel, he said. Around 70 new projects are seeking approval, he said, including proposals to convert old coal plants to burn garbage instead. Poor enforcement in Poland means emissions of toxins such as dioxins and furans often reach hazardous levels, Głuszyński said, but tightening EU rules may help,

Britain, too, seems intent on pushing ahead with an expansion of burning, with dozens of new projects under consideration. Collectively, they would double current incineration capacity.

There are hints, though, that some of what’s on the drawing board may not materialize. Wales said last month it would put a moratorium on large new waste-to-energy plants, and consider an incineration tax. In February, Kwasi Kwarteng, Britain’s secretary for business, energy and industrial strategy, refused an application for a new incinerator in Kent, east of London, although he allowed expansion of an existing plant. In his decision, he said the project could hamper local recycling, reasoning that encouraged incinerator opponents.

In Cambridgeshire, the leafy, well-off home of the University of Cambridge, plans for another plant stalled in the face of vocal opposition from residents and local politicians. But such decisions can raise uncomfortable questions. The North London Waste Authority, which manages waste for seven boroughs in the capital, plans to expand, and extend the life of, an aging incinerator in the neighborhood of Edmonton, which has a large Black and immigrant population and is one of the country’s lowest-income areas.

“Why is (incineration) not good enough for Cambridgeshire, but it’s good enough for Edmonton, which is poor, racially diverse and already suffers with a lot of pollution?” asked Delia Mattis, an activist with the local Black Lives Matter group. “There’s racism in the planning.” Other groups, including Stop the Edmonton Incinerator Now, are also working to close the facility, which had been nearing the end of its life before the overhaul was proposed.

The neighborhood — where men’s life expectancy is 8.8 years shorter, and women’s 5.7 years shorter, than in wealthier parts of its borough — “is like a nonstop conveyor belt of trucks” going to and from the incinerator, Mattis said.

A report from Unearthed, Greenpeace’s investigative arm, found British incinerators are three times more likely to be sited in the poorest and most racially mixed areas as in the wealthiest, whitest ones.