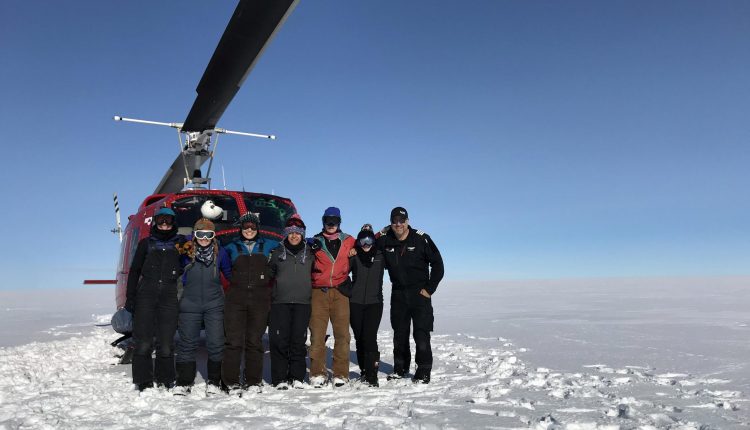 The NASA-funded Seismometer to Investigate Ice and Ocean Structure (SIIOS) performed well in seismic experiments conducted in snowy summer Greenland, according to a new study by the SIIOS team led by the University of Arizona published recently in Seismological Research Letters.

SIIOS could be a part of proposed NASA spacecraft missions to the surface of Europa or Enceladus. These moons of Jupiter and Saturn are encrusted by an icy shell over subsurface liquid oceans, and seismic data could be used to better define the thickness and depth of these layers. Other seismic points of interest on these worlds could include ice volcanoes, drainage events below the ice shell and possibly even a timely glimpse of the reverberations from a meteorite impact.

To better mimic mission conditions, the SIIOS team attached flight candidate seismometers to the platform and legs of a buried and aluminum-shielded mock spacecraft lander on the Greenland Ice Sheet. Angela Marusiak of NASA’s Jet Propulsion Laboratory and colleagues found that the lander’s recordings of seismic waves from passive and active seismic sources were comparable to recordings made by other ground seismometers and geophones up to a kilometer away.

Although the attached seismometers did pick up some of the shaking of the lander itself, Marusiak said the lander and ground-based seismometers “performed very similar to each other, which is definitely promising,” in detecting earthquakes and ice cracking.

The experimental array was placed over a subglacial lake (a new feature in Greenland that had not yet been studied with seismic approaches) and the lander-coupled seismometers were also able to detect the ice-water interface, which would be one of the instrument’s primary tasks on the icy ocean worlds.

The scientists buried the lander and nearby seismometers a meter deep in granular snow, and covered the lander with an aluminum box, to reduce the effects of wind and temperature variation on the instruments. This brought the experiment closer to the atmospheric conditions that might be expected on an airless moon like Europa. During an icy ocean world mission, however, the seismometer would likely only be deployed to the surface and may not be buried.

“What we’re hoping for is if we are able to go to Europa or Enceladus or one of these icy worlds that doesn’t have huge temperature fluctuations or a very thick atmosphere and we’re taking away that wind noise, essentially you’re taking away what’s going to cause a lot of shaking of the lander,” explained Marusiak, who conducted the research while she was a Ph.D. student at the University of Maryland.

And unlike on Earth, researchers for these missions wouldn’t be able to deploy a large array of seismometers and gather data for months at a time to build a picture of the moon’s interior. The available solar energy to power the devices would be 25 times less than that on Earth, and devastating radiation would be likely to destroy the instruments within a couple weeks on a moon like Europa, she said.

After taking an Air Greenland helicopter ride to the site in the summer of 2018, the SIIOS deployment team set up the experimental lander and array on the ice sheet about 80 kilometers north of Qaanaaq. For the active source experiment, the instruments recorded seismic signals created by the team members striking aluminum plates with a sledgehammer at locations up to 100 meters from the array’s center.

The array then made passive recordings of local and regional seismic events and the ice sheet’s ambient creaking and cracking noises for about 12 days, until an unusual summer snow buried the solar panels powering the array.

Marusiak was proud to be a member of an all-female demobilization team, and by the warm reception that the scientists received at the Thule AFB. The work would not have been possible without the logistics support provided by the National Science Foundation, Polar Field Services, and local guides.

The team plans to return to Greenland this summer to test a prototype seismometer that has been designed to account for more mission-ready conditions of radiation, vacuum and launch vibration, she said.