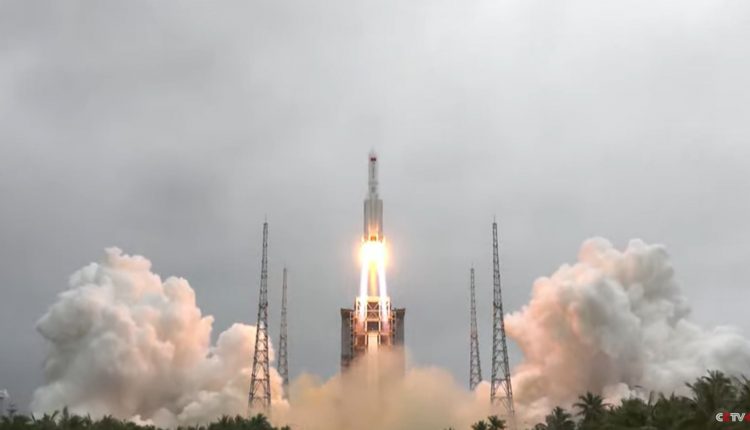 Long March 5B core stage likely to reenter the Earth’s atmosphere in the coming days.

HELSINKI — China launched the first module for its space station into orbit late Wednesday, but the mission launcher also reached orbit and is slowly and unpredictably heading back to Earth.

The Long March 5B, a variant of China’s largest rocket, successfully launched the 22.5-metric-ton Tianhe module from Wenchang Thursday local time. Tianhe separated from the core stage of the launcher after 492 seconds of flight, directly entering its planned initial orbit.

However this core stage is now also in orbit and is likely to make an uncontrolled reentry over the next days or week as growing interaction with the atmosphere drags it to Earth. If so, it will be one of the largest instances of uncontrolled reentry of a spacecraft and could potentially land on an inhabited area.

Most expendable rocket first stages do not reach orbital velocity and reenter the atmosphere and land in a pre-defined reentry zone. Some other larger, second stages perform deorbit burns to lower altitude to reduce time in orbit and lower chances of collisions with other spacecraft or to immediately reenter the atmosphere.

There had been speculation that the Long March 5B core would perform an active maneuver to deorbit itself, but that appears not to have happened. At a Wenchang press conference Thursday, Wang Jue, Commander-in-Chief of Long March 5B launch vehicle, stated (Chinese) that this second Long March 5B had seen improvements over the first launch, but a possible deorbit maneuver was not stated.

Ground based radars used by the U.S. military to track spacecraft and other objects in space have detected an object and catalogued it as the Long March 5B rocket body. Now designated 2021-035B, the roughly 30-meter-long, five-meter-wide Long March 5 core stage is in a 170 by 372-kilometer altitude orbit traveling at more than seven kilometers per second.

A possible amateur ground observation of the rocket core showing regular flashes suggests that it is tumbling and thus not under control.

Still no TLEs for the Vega launch. One more TLE for object B from the Tianhe launch, whose slow decay rate confirms it is the CZ-5B core stage pic.twitter.com/0dVkUkcpjA

The first launch of the Long March 5B also saw the first stage reach orbit and make an uncontrolled reentry six days later. Reentry occurred over the Atlantic Ocean according to the U.S. Space Force’s 18th Space Control Squadron.

Had the event taken place 15-30 minutes earlier debris not destroyed by the heat of reentry could have landed on U.S. soil. The incident drew criticism from then NASA Administrator Jim Bridenstine.

Where and when the new Long March 5B stage will land is impossible to predict. The decay of its orbit will increase as atmospheric drag brings it down into more denser. The speed of this process depends on the size and density of the object and variables include atmospheric variations and fluctuations, which are themselves influenced by solar activity and other factors.

The high speed of the rocket body means it orbits the Earth roughly every 90 minutes and so a change of just a few minutes in reentry time results in reentry point thousands of kilometers away.

The Long March 5B core stage’s orbital inclination of 41.5 degrees means the rocket body passes a little farther north than New York, Madrid and Beijing and as far south as southern Chile and Wellington, New Zealand, and could make its reentry at any point within this area.

The most likely event will see any debris surviving the intense heat of reentry falling into the oceans or uninhabited areas, but the risk remains of damage to people or property.

Spaceflight observer Jonathan McDowell told SpaceNews that the previous Long March 5B launch saw the most massive uncontrolled reentry in decades and the fourth biggest ever. “The Long March 5B core stage is seven times more massive than the Falcon 9 second stage that caused a lot of press attention a few weeks ago when it reentered above Seattle and dumped a couple of pressure tanks on Washington state.”

McDowell said he hoped China would have enhanced the core stage to perform a controlled deorbit after separating from Tianhe. “I think by current standards it’s unacceptable to let it reenter uncontrolled,” McDowell said.

“Since 1990 nothing over 10 tons has been deliberately left in orbit to reenter uncontrolled.” The Long March 5B core stage, without its four side boosters, is thought to have a “dry mass”, or when it is empty of propellent, of about 21 metric tons in mass.

Holger Krag, head of the Space Safety Programme Office for the European Space Agency, says from their experience, there is an average amount of mass of about 100 tons re-entering in an uncontrolled way per year. “This relates to about 50-60 individual events per year.”

“It is always difficult to assess the amount of surviving mass and number of fragments without knowing the design of the object, but a reasonable “rule-of-thumb” is about 20-40% of the original dry mass.”

Components made of heat resistant materials, such as tanks and thrusters made stainless steel or titanium, can reach the ground. Surviving objects will fall vertically after deceleration and travel at terminal velocity.

The largest and most famous incident was the 1979 reentry of NASA’s 76-ton Skylab, whose uncontrolled reentry scattered debris across the Indian Ocean and Western Australia.

A night time reentry could make for spectacular viewing, as with a recent reentry of a Falcon 9 second stage, with debris fortunately not causing harm.

China’s 8-ton Tiangong-1 spacelab made a high-profile uncontrolled reentry in 2018, while the successor Tiangong-2 was deorbited in a controlled manner in 2019.

Stratolaunch aircraft returns to the skies after two-year hiatus – SpaceNews