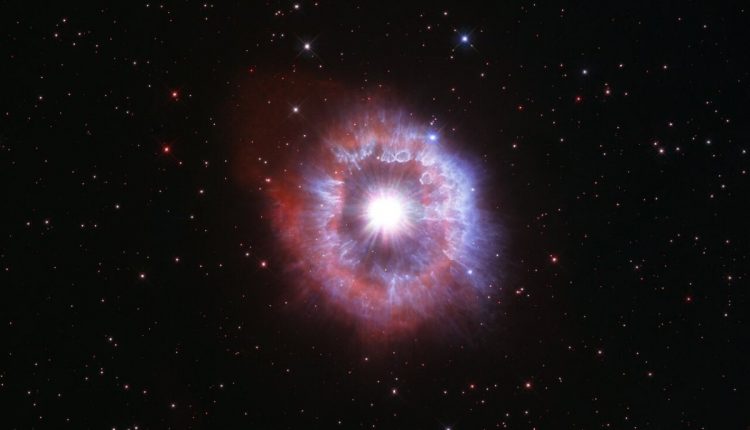 The star itself, dubbed AG Carinae, is of a class called Luminous Blue Variables and appears surrounded by a huge shell of material that the star blew into space thousands of years ago. That shell, called a nebula, is 5 light-years wide, about the distance from Earth to the nearest star beyond our sun, Alpha Centauri, according to the European Space Agency, which helps operate Hubble.

“I like studying these kinds of stars because I am fascinated by their instability,” Kerstin Weis, who studies luminous blue variable stars at Ruhr University in Bochum, Germany, said in a NASA statement. “They are doing something weird.”

The Hubble Space Telescope: 30 years that transformed our view of the universe

In the new image, hydrogen and nitrogen gases glow red, while blue marks filamentary dust structures lit by the star. Hubble studied the scene in visible and ultraviolet light.

Luminous blue variable stars have two modes, alternating between stretches of quiet and a handful of massive outbursts over the course of their lifetimes. During one of those outbursts, these stars become much brighter — right now, scientists estimate that AG Carinae shines about a million times brighter than Earth’s sun.

Related: The best Hubble Space Telescope images of all time!

The outbursts, surprisingly, are a tactic to keep the star together, according to the ESA statement. Within a star, the inward pressure of gravity and the outward pressure of radiation from the star typically balance, but in an unstable star, one occasionally wins out over the other. In the case of AG Carinae, that means outward pressure briefly overpowering gravity to spew material out into space, an outburst that stabilizes the star into balance again, more or less.

But even still, massive stars can only endure a certain number of such outbursts before running out of fuel. AG Carinae, which scientists think is about 70 times more massive than the sun, may last perhaps 5 million or 6 million years. Short lifespans — only tens of thousands of years as a luminous blue variable — make these stars fairly rare; scientists have only identified a few dozen in our Milky Way and nearby galaxies.