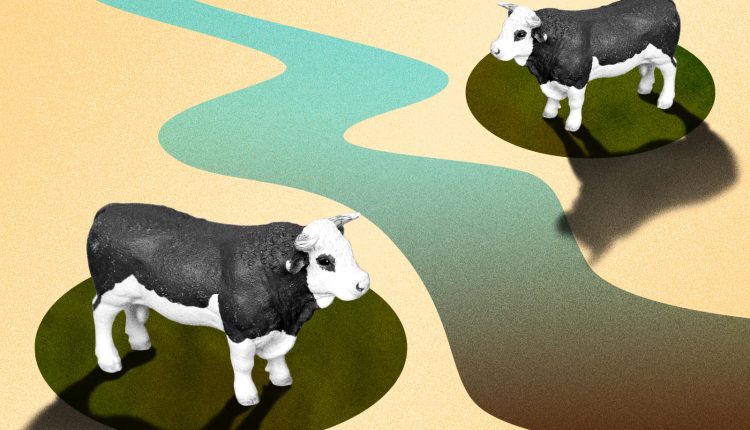 In northern Iowa, nestled among limestone bluffs, is Bloody Run Creek, a six-and-a-half mile, clear-water stream revered for its trout fishing. The creek is a popular tourist spot and  one of just 34 bodies of water in the entire state labeled as an “Outstanding Iowa Water” for its near-pristine condition. Earlier this month, however, the Iowa Department of Natural Resources granted final approval for a massive new concentrated animal feeding operation, or CAFO, roughly two miles from the banks of Bloody Run.

The facility, owned by Supreme Beef LLC and located in Clayton County, will be one of Iowa’s largest CAFOs ever, housing 11,600 heads of cattle and producing an estimated 35.4 million gallons of manure annually. The approval on April 2 of the facility’s nutrient management plan — essentially how the company will store and dispose of manure — comes after years of opposition from citizen and environmental groups.

The area surrounding Bloody Creek consists of what is known as karst topography, a network of porous limestone and sinkholes, a geologic composition that allows pollutants and nutrients to easily seep into local groundwater. Manure from the CAFO is expected to be spread on farm fields within 30 miles of the creek, an area classified as having “highly erodible” soil. Additionally, opponents argue that the amount of manure the animal feedlot will produce is actually much higher than what Supreme Beef calculated, and that the company didn’t include in its management plan mandatory conservation practices like how it will prevent soil erosion.

“Multiple Outstanding Iowa Waters [and watersheds] could be polluted as a result of this facility,” said Michael Schmidt, a staff attorney for the Iowa Environmental Council.

The battle to save Bloody Run Creek exemplifies the growing discontent over animal feeding operations in Iowa and the state’s rapidly degrading water quality. As of 2018, Iowa had 3,744 CAFOs with over 1,000 animals, more than any other state in the U.S. Minnesota, in comparison, has just 1,400 CAFOs that size. North Carolina — a state that has faced much public backlash over its animal feedlots — has even fewer.

More than half of the water bodies in Iowa are considered “impaired” by the Iowa Department of Natural Resources, or DNR, and the U.S. Environmental Protection Agency — primarily due to harmful levels of bacteria and algae growth fueled by the runoff of manure and fertilizers. Additionally, 40 percent of drinking water wells tested in the state contain bacteria.

“Even though Iowa is known for having a lot of livestock and being an agricultural state, we still have some great resources that need to be protected,” said Schmidt. “The approval of this [Supreme Beef project] puts several of those at risk.”

Community and environmental groups have pushed back against the Supreme Beef project since 2017, when it was initially proposed as an industrial waste-to-energy biogas facility. The company’s stormwater permit was pending when Iowa DNR officials found that Supreme Beef wasn’t using silt fences to prevent soil erosion, resulting in the turbidity of the water downstream of the construction site to be 500 times worse than nearby waterways. The DNR fined Supreme Beef $10,000 — the maximum penalty the agency can issue for environmental violations — and ordered the company to improve stormwater controls. In 2019, Supreme Beef was fined another $10,000 for continued incompliance. The company then modified the project, reapplied as an animal feeding operation instead of an industrial biogas facility, and resumed work on the site.

By last year, the DNR still hadn’t approved Supreme Beef’s nutrient management plan because they said the company hadn’t done the correct tests to determine how capable the soil was of holding phosphorus — a critical measure to confirm that nutrients wouldn’t run off into surface and ground water and cause contamination.

Supreme Beef also failed to update Iowa environmental regulators on how it would manage the 35.4 million gallons of manure produced by its animal feedlot, compared to its original biogas facility plan, which has different regulations, explained Wally Taylor, the legal and conservation chair for the Iowa chapter of the Sierra Club. “But the DNR was willing to manipulate around all that and approved the nutrient management plan anyway,” he said.

A 2020 email obtained by the Sierra Club through an open records request shows that Supreme Beef also tried to bend the rules of the required nutrient management plan. “Can he [Jared Walz, co-owner of Supreme Beef] pull back on the number of animals for his permit at this time so he can get permitted and later re-apply for the remaining numbers?,” an environmental consultant for Supreme Beef wrote to the DNR. In response, DNR officials denied the exemption and reiterated the full requirements needed in Supreme Beef’s plan.

Later that same day, however, after a phone conversation between State Senator Dan Zumbach, father-in-law to Walz, and Kayla Lyon, director of the DNR, the agency gave Supreme Beef permission to apply for a smaller CAFO of 2,750 animals, and reapply later for an additional 8,900. Activists point out that the site of the Supreme Beef CAFO in Clayton County is not within Zumbach’s constituency.

“The DNR is putting this company and their relationships with state senators and state representatives above the environment, which is their mission,” Jessica Mazour, conservation coordinator for the Iowa chapter of the Sierra Club, told Grist.

“The factory farm industry gets what it wants,” she continued. “Right now the immediate next step is exposing how much power this industry has at the expense of the taxpayers.”

The DNR and Supreme Beef both declined to comment for this story.

Bloody Run Creek is “just absolutely the wrong place for this,” Larry Stone, a Clayton County resident who fishes at the creek, told Grist, pointing to the animal feedlot’s proximity to a high-quality trout stream, karst topography, and location near U.S. Highway 1852, a popular tourist route.

Stone was one of 100 local residents and environmental groups that spoke out against the CAFO at a virtual meeting held by the DNR in March.

When asked by agency officials during that same meeting to detail how Supreme Beef would manage runoff of manure into nearby Bloody Run, co-owner Walz said, “I really don’t have much to say. I just want to thank you for your time and your support and thoughts and your prayers for planning for our site. God bless and hopefully everybody has a wonderful evening.”

This Pink Supermoon Has a Twist – Expect Flooding, but a Lunar Cycle Is Masking Effects of Sea Level Rise