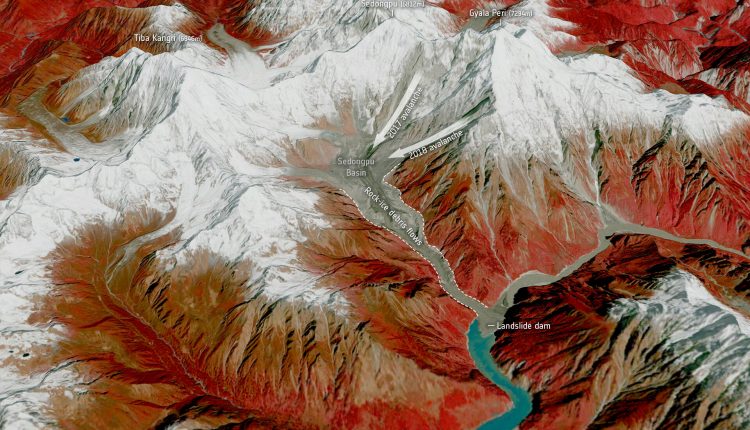 One tends to think of mountain glaciers as slow moving, their gradual passage down a mountainside visible only through a long series of satellite imagery or years of time-lapse photography. However, new research shows that glacier flow can be much more dramatic, ranging from about 10 metres a day to speeds that are more like that of avalanches, with obvious potential dire consequences for those living below.

Glaciers are generally slow-flowing rivers of ice, under the force of gravity transporting snow that has turned to ice at the top of the mountain to locations lower down the valley – a gradual process of balancing their upper-region mass gain with their lower-elevation mass loss. This process usually takes many decades. Since this is influenced by the climate, scientists use changes in the rate of glacier flow as an indicator of climate change.

For some glaciers around the world this gradual flow can speed up, so that they advance several kilometres in just a few month or years, a process called glacier surging. After a surge, the glacier usually remains still and the displaced ice melts over a few decades.

Although surges can block rivers and create lakes that may burst suddenly, these events don’t often pose any danger, as by their very nature, they tend to be in remote and sparsely-populated regions – a fact that means that these events are often only known about thanks to data and images from satellites.

For several years now, scientists have known that a glacier can also actually detach from the mountain rock and gush down to the valley at speeds of up to 300 kilometres an hour as a fluid ice-rock avalanche.

However, a paper published recently in The Cryosphere describes how scientists working in ESA’s Climate Change Initiative Glaciers team has discovered, together with several colleagues, that these glacier detachments have happened much more often than had been known. Even more surprisingly, this is happening to glaciers resting on relatively flat beds.

Andreas Kääb, from the University of Oslo, explained, “We have known about debris flows originating from glaciers that break off at high elevations for several decades now, however, until relatively recently, we were extremely surprised to discover that glaciers resting on flatter beds can also detach as a whole.

“These events are reported only rarely. In fact, they only really came to light in 2002 after a huge chunk of the Kolka glacier, which sits in a gently sloping valley on the Russian–Georgian border, detached and thundered down the valley at about 80 metres a second, carrying around 130 million cubic metres of ice and rock that killed more than 100 people.

“Using satellite data, we have now discovered that such events are more common than we could have ever imagined, and this might be a consequence of a changing climate.”

The team of scientists from all over the world used data from different satellites including the Copernicus Sentinel-1 and Sentinel-2 missions and the US Landsat mission as well as digital elevation models to document and analyse events that were already known about, but also to identify glacier detachments that had not been recorded so far.

They studied 20 glacier detachments that occurred in 10 different regions, from Alaska to the Andes and from the Caucasus to Tibet.

Frank Paul, from the University of Zurich, said, “We analysed the timing of events, calculated volumes, run-out distances, elevation ranges, permafrost conditions as well as possible factors triggering these glacier avalanches. Although we found some common characteristics, there are diverse circumstances that may have led to these events. However, we have concluded that, at least for some events, the effects of a warmer climate, such as permafrost thawing and meltwater infiltration, may well be to blame.”

Andreas Kääb added, “The bottom line is that detachment of glaciers resting on flat bedrock are more common than we thought.

“The current era of frequent high-resolution optical and radar data, not least from Sentinel-2 and Sentinel-1, has brought a step-change in detecting and understanding these events after they happen. Although we are still far away from having a prognostic tool to detect possible events before they happen, thanks to satellite data and this new understanding, we might be able to detect precursor signals in good time to potentially save lives.”