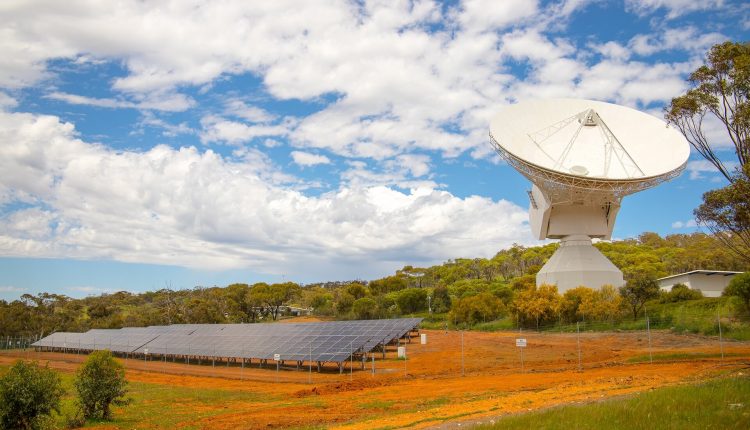 The 620-tonne antenna will be a new model complementing the existing deep space antenna on the site, with novel functionality and support for additional communication frequencies.

It will feature the latest in deep space communication technology, including a super-cool ‘antenna feed’ that will be cryogenically cooled to around -263 C and increase data return by up to 40%.

The antenna will be so sensitive it can detect signals far weaker than the signal from a mobile phone – if there were one – on the surface of Mars.

Investing in Europe’s future with Australia

“We are happy to announce the latest addition to ESA’s state-of-the-art deep space communication network and this important next step in our relationship with the Australian Space Agency,” says ESA Director General Josef Aschbacher.

The Agency’s deep-space stations are supporting a growing number of increasingly sophisticated exploration probes like Gaia, BepiColombo, Solar Orbiter and, soon, the ExoMars rover, Euclid and JUICE, as well as upcoming space safety missions like Hera and the Sun-monitoring space weather mission.

“ESA’s network is crucial infrastructure that helps enable cooperation and cross-support with missions flown by partners like NASA, JAXA and other agencies, and this boosts science return and efficiency for all involved,” adds Director General Aschbacher.

“It’s also part of the ESA infrastructure that can support new space and commercial actors, a key element of ESA’s Agenda 2025 priorities.”

ESA has budgeted €45 million for the new antenna, covering antenna procurement and construction as well as upgrades to station buildings and services. While the prime contractor will come from an ESA Member State, a significant portion of the budget will be spent in Australia with the involvement of a number of Australian companies.

“The new antenna is not only positive progress in the Agency and ESA’s cooperative relationship, but also an important contributor to the local economy which will help grow Australia’s civil space industry,” says Head of the Australian Space Agency Enrico Palermo.

The new deep space antenna at the New Norcia site is a joint undertaking contributing to the long-term cooperation between ESA and Australia in the space domain. It enables significant economic, technology and scientific benefits for both partners, and will pave the way for further collaboration in areas such as space communication, space situational awareness and mission operations.

Deep space antennas are used to communicate with spacecraft on missions that take them far from Earth – whether to the Moon, the Sun, the planets or even asteroids.

The number of deep space missions launched worldwide is rapidly increasing, and so is the need to upload commands and download status updates as well as valuable scientific data from these intrepid explorers.

ESA’s large antennas communicate with spacecraft so far out in space – as far as 1.44 billion kilometres from Earth and even further in future – that they can only ‘listen’ to spacecraft in a relatively small area of the sky at any one time. If two spacecraft are in a very similar direction from Earth – both at Mars, for example – it is possible to use one antenna to communicate with them both at the same time.

But as space exploration continues to take us in new directions, there will be a greater need to maintain frequent communication with spacecraft located in widely different portions of the sky – such as Mars and Mercury. To keep these missions safe and get the most out of the data they collect, ESA needs more antennas.

Located in Western Australia, New Norcia  provides a strategic geographical position allowing around-the-clock coverage of deep space missions, with a perfect complement to the sites in Argentina and Spain.

Building a second antenna on an existing site allows for cost-effective construction, maintenance and operation. Funding for the new antenna was confirmed at ESA’s Space19+ ministerial council in 2019.

Studies to determine the exact location of the new antenna on the New Norcia site began at the end of 2019. Construction is due to be completed in 2024 with the antenna entering operation in the second half of that year – just in time to help out with the JUICE and Hera missions, among many others.

These custom, igloo-shaped workspaces are 3D-printed with recycled PET