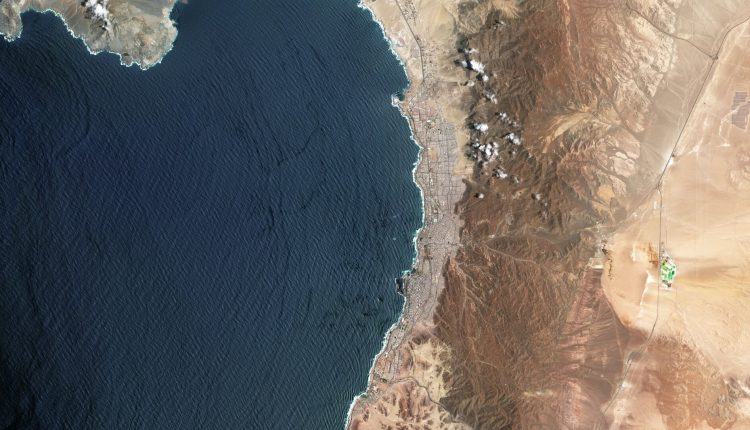 Located around 1000 km north of Santiago, Antofagasta is the capital of both the Antofagasta Province and Region. The Antofagasta province borders the El Loa and Tocopilla provinces to the north and the Pacific Ocean to the west.

The city stretches approximately 22 km along the coast, snuggled between the ocean and the arid mountains to the east. The largest city in northern Chile, Antofagasta has a population of around 400 000 people. The city’s early growth resulted from the discovery of nitrate deposits in 1866, while today the economy is mainly based on the exploitation of various minerals such as copper and sulphur.

In the right of the image, large, emerald green geometric shapes are visible and are most likely evaporation ponds used in mining operations. These bright colours are in stark contrast with the surrounding desert landscape, which is largely devoid of vegetation, making them easily identifiable from space.

The city of Antofagasta is also a communications centre on the Pan-American Highway, visible as distinctive black lines in the right of the image, and is also linked by rail to the mines, as well as Bolivia and Argentina.

Antofagasta is located within the Atacama Desert which is considered one of the driest places on Earth, as there are some parts of the desert where rainfall has never been recorded. Antofagasta typically has a cold desert climate with abundant sunshine, with January being its warmest month.

This image, captured on 6 January 2021, shows little cloud cover over the city and surrounding area but strong westerly winds have created distinct wave patterns over the ocean – visible all the way from space.

This image was captured by the Copernicus Sentinel-2 mission – a two-satellite mission to supply the coverage and data delivery needed for Europe’s Copernicus programme. Each satellite carries a high-resolution camera that images Earth’s surface in 13 spectral bands. Data from Sentinel-2 can help support ocean applications, monitor changes in urban expansion, land-cover change and agriculture monitoring.

This image is also featured on the Earth from Space video programme.

Supermassive Black Holes Like to Eat, but Have a Variety of Table Manners

Getting ready to rocket

Did you always want to be an astronaut?