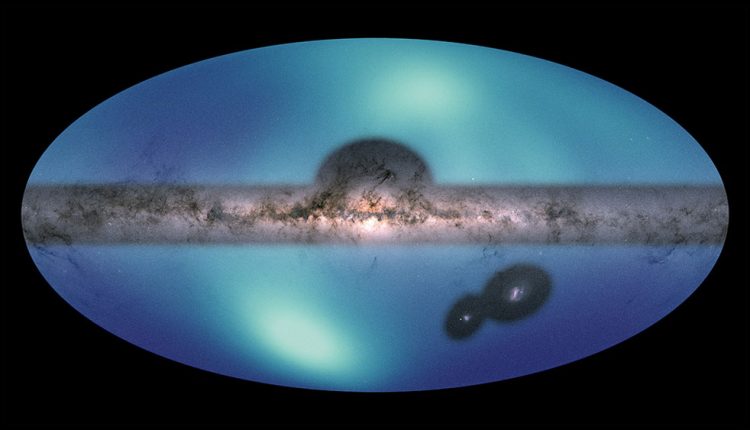 
A hefty galactic dwarf is falling toward the Milky Way. Known as the Large Magellanic Cloud, it’s plowing through — and pulling on — the fog of dark matter that surrounds our galaxy. Sparse stars float like the tips of dark matter icebergs in this galactic ocean. Now, astronomers have definitively detected a pile-up in those stars (and presumably the dark matter, too) that this dwarf has left in its wake. The results appear in the April 22nd Nature.

Charlie Conroy (Center for Astrophysics, Harvard & Smithsonian) and his colleagues plotted the distances and positions of 1,301 giant stars in our galaxy’s outermost reaches, between 200,000 and 330,000 light-years from the galactic center. The European Space Agency’s Gaia satellite provided these stars’ positions on the sky, while data from NASA’s Widefield Infrared Survey Explorer mission provided their distances.

Two regions on the sky stand out for their thickness of halo stars, one above the galactic plane and one below. The latter extends toward the Large Magellanic Cloud in the south; the denser region of stars in the north is even larger, spanning a quarter of the sky.

The team compared the observed stellar densities to computer simulations that trace the gravitational effects of the Large Magellanic Cloud as it falls in toward the Milky Way for the first time. Nicolás Garavito-Camargo (University of Arizona) led the work on the simulations, which show that the dwarf galaxy should create a wake behind it as it falls through our galaxy’s halo, trailing stars (and dark matter) behind it. The expected wake matches the dense region below the plane.

“We think this wake is made up of dark matter,” says Garavito-Camargo. “It drags stars along with it, which is how we can detect it.”

If the Large Magellanic Cloud were looping around our galaxy for a second or third time, any such wake would be smeared out; the fact that we see it so clearly provides strong evidence that the dwarf is making its first pass around the Milky Way.

Meanwhile, the Milky Way itself moves in response to the massive dwarf, which has a tenth our galaxy’s heft. As the pair’s center of mass shifts, a weaker but wider-ranging effect gathers stars closer together in a large region above the galactic plane.

“This is a very cool result,” says Geraint Lewis (University of Sydney), who was not involved in the study. “This gravitational wake behind a large dwarf galaxy was predicted a while ago, and it was expected that stars should pile up also, but given that the halo is so sparse it has taken a lot of work to identify the signature in the stars.”

Both above and below the plane, the simulations reproduce reality quite well, especially when you consider that they weren’t calibrated or fixed to the observations in any way. The main difference is that, in real life, the stellar crowding is actually more pronounced than it was in the simulations. This could be because of complicating factors in reality that are not yet accounted for in the simulations, such as the existence of the less massive Small Magellanic Cloud.

There’s also still a lot that we don’t know about our galaxy’s dark matter halo. Results like this one will help astronomers refine their understanding of the shape it takes around our galaxy.

“As we get more data, it is clear that dark matter halo is not a simple structure and our calculation of the properties of the halo will be more complex,” Lewis adds. “The existence of a wake of dark matter does offer some interesting possibilities in unraveling its nature.”

The wake’s discovery, for example, points to higher-density regions of dark matter, where particles may annihilate more frequently (but still rarely), betraying their existence by the photons they emit. Such regions might become targets of future dark matter searches. The theorists of the group are also working to fine-tune the simulations, turning knobs to see what dark matter scenarios best match observations.

“What has been a purely theoretical prediction has now been validated by observational data, providing a compelling argument for the existence of dark matter,” says study coauthor Gurtina Besla (University of Arizona).

Of mice and spacemen: Understanding muscle wasting at the molecular level

Hidden processes at work in the hearts of large stars revealed