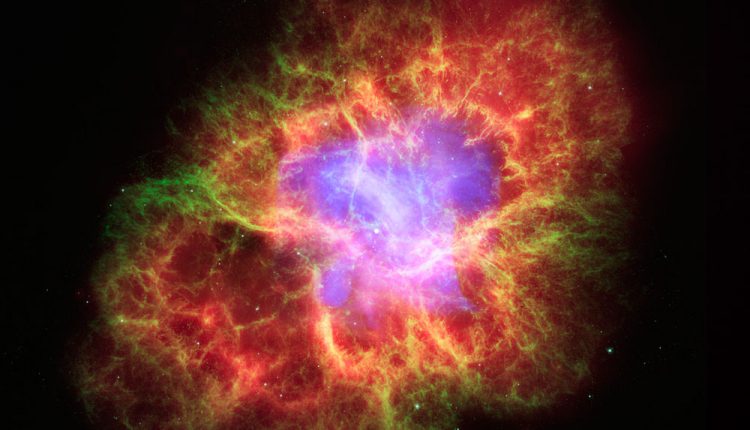 
Cannot display WorldWide Telescope because your browser does not support iframes.

Astronomers first discovered the spinning neutron star nestled within the Crab Nebula not by its regular radio heart, which beats 30 times a second, but by its more sporadic giant radio pulses. Despite decades of observations, we still don’t know what causes these outbursts — only a few pulsars even make them. The random pulses nevertheless catch astronomers’ attention: Within a few microseconds, they emit hundreds to thousands of times the energy of the pulsar’s routine beats.

Giant radio pulses are coherent, which means that the radio waves arrive in phase with each other (like the light emitted from laser pointers). Their irregular and coherent nature seems to suggest a tie to more distant, powerful, and mysterious fast radio bursts (FRBs). Some have even suggested that FRBs are giant radio pulses, or at least their more energetic siblings. Understanding the Crab’s emissions could help shed light on pulsar physics.

A NICER View of the Crab

Discovered in 1968, the Crab Nebula is 6,500 light-years away in Taurus, the Bull. The tendrils of gas we see there now were catapulted into space when a massive star collapsed and went supernova 967 years ago.

The first observations of this pulsar already showed giant radio pulses, and later inspection showed that when the radio pulsed, the visible light brightened too. Now, Teruaki Enoto (RIKEN, Japan) and colleagues have shown the same boost occurs at X-ray wavelengths, too.

The team coordinated observations with two Japanese radio observatories and the Neutron star Interior Composition Explorer (NICER), an instrument aboard the International Space Station specifically designed to track bright pulsars with timing precision down to 100 nanoseconds. Over 1½ days’ worth of radio and X-ray observations, the researchers saw 26,000 giant radio pulses over 3.7 million pulsar rotations.

The researchers found that when the pulsar sporadically bursted with radio energy, X-ray emission went up a bit as well, by about 4%. That may not sound like much, but an individual X-ray photon is roughly 1,000 times more energetic than a single photon at visible wavelengths. Even the slight increase in X-rays means that the total energy the pulsar emits in these flashes is dozens to hundreds of times higher than previously estimated from radio and visible-light data alone. And not only are giant radio pulses producing more energy than first realized, they’re also emitting photons across the spectrum from radio to X-rays, a feat that astronomers now need to explain.

Interestingly, the flares’ sheer power rules them out as a source of fast radio bursts. Giant radio pulses draw their power from the pulsar’s spin. If some more energetic version of this were operating in fast radio bursts, thought to be powered by highly magnetized versions of pulsars, repeating bursts would become less powerful over time. But astronomers haven’t observed that to be the case, for example, in the repeating FRB 121102.

In the meantime, the new observations of the Crab will help astronomers solve pulsars’ puzzles. “We still don’t understand how or where pulsars produce their complex and wide-ranging emission,” Enoto says. “It’s gratifying to have contributed another piece to the multiwavelength puzzle of these fascinating objects.”

How to find Hydra, the biggest constellation in the sky

New evidence of how and when the Milky Way came together: Aging individual stars…