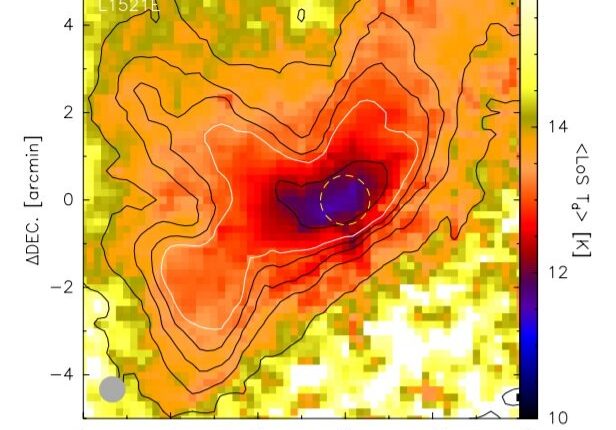 Using the ARO 12-m telescope, astronomers have investigated a young starless core known as Lynds 1521E (or L1521E). The study resulted in the detection of complex organic molecules in this object. The finding is detailed in a paper April 15 on the arXiv pre-print repository.

Starless cores are dense, cold regions within interstellar molecular clouds. They represent the earliest observable stage of low-mass star formation. Observations show that even in such cold environments, complex organic molecules can be present. Finding these molecules in starless cores could help us better understand the processes of stellar formation and evolution.

L1521E is a dynamically and chemically young starless core in the Taurus Molecular Cloud, one of the two known in this cloud. It has a modest central density of around 200,000−300,000 cm−3 and it is assumed that it can only have existed at its present density for less than 100,000 years, which makes it one of the youngest starless cores so far detected and an excellent object to study how complex organic molecules form.

So a group of astronomers led by Samantha Scibelli of the University of Arizona searched for complex organic molecules in L1521E using the 12-meter telescope of the Arizona Radio Observatory (ARO), with promising results.

“Molecular line observations were made with the ARO 12m telescope during three separate seasons, two years apart, using two different backend receivers. The first observing shifts between January 12, 2017 and April 27, 2017 with 10 tunings between 84 and 102 GHz (3.6 − 2.9mm),” the researchers explained.

The study confirmed that the estimated chemical age of L1521E is indeed young, as complex organic molecules ﬁrst peak at about 60,000 years. This is consistent with the carbon monoxide (CO) depletion age of this starless core.

The astronomers note that the detected abundances of complex organic molecules for L1521E are in general underestimated. This suggests that a desorption mechanism is missing, or the current description of the already considered mechanisms should be revised by further studies.

All in all, the results obtained by the team seem to suggest that complex organic molecules observed in cold gas formed not only in gas-phase reactions, but also on surfaces of interstellar grains. The new findings could also have implications for future studies of starless cores.

7 Easy Things to See on the “Supermoon” – Sky & Telescope