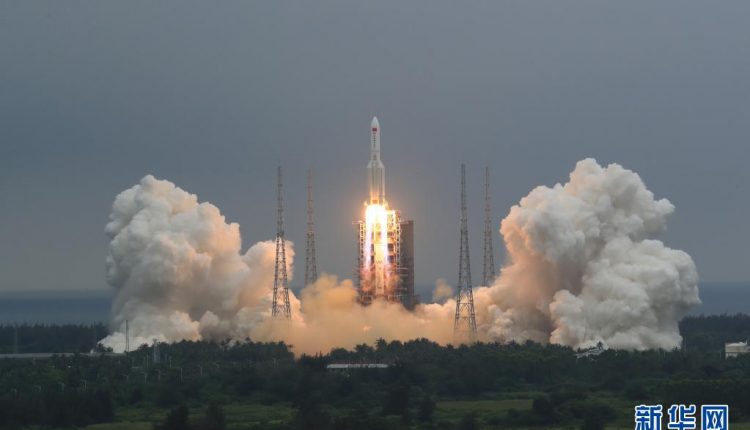 Tianhe is similar to the central Zarya module at the heart of the International Space Station; that module launched in 1998.

The space station will begin to accept automated Tianzhou cargo vehicles and crewed Shenzhou spacecraft, starting perhaps as early as next month. It’s uncertain at this point if three-person crews will carry out a permanent presence on the space station, or whether they’ll rotate out in temporary expeditions.

U.S. International Traffic in Arms Regulations (ITAR) restricts technology trade between the U.S. and China, making China one of the few space-faring nations that is conspicuously absent from the International Space Station. Though China is largely going it alone in space, the country’s space agency may open up its own space station to international participation.

Though the International Space Station has hosted a continuous human presence in space since 2000, this could well end in the coming years. Though the U.S. once again has the capability to send crew to the station thanks to SpaceX’s Crew Dragon, Russia has hinted at leaving the ISS partnership, perhaps as early as 2025. This could mean China’s station could take up the mantle of continuing a human presence in low-Earth orbit by the late 2020s.

The launch follows a string of successes in space for China over the past year, including the Chang’e 5 lunar sample return in late 2020 and the arrival of the Tianwen 1 mission in orbit around Mars earlier this year. Tianwen 1 is set to deploy its lander and rover on Mars this coming May.

How to Observe Tiangong 3

Like the ISS, Tianhe will also be highly visible in orbit as assembly begins. The core module is listed as COSPAR ID 2021-035A and orbits every 92 minutes at an altitude of 370 kilometers (230 miles), inclined 41° relative to Earth’s equator. This means the orbit reaches its farthest point north right over latitude 41°N, roughly corresponding to New York City, Chicago, and Salem, Oregon. Heavens-Above will list the station on their front page.

Watch for a good pass of the Tainhe core module and the new space station as it takes shape, coming to a sky near you.

Can bacteria capture and eliminate microplastics?