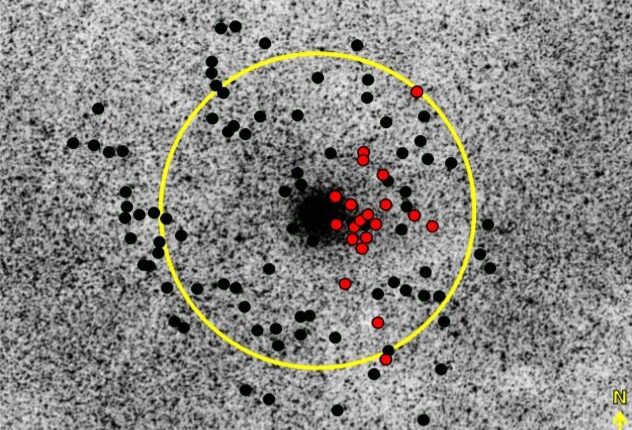 Using the Very Large Telescope (VLT), astronomers from Chile have performed a chemical analysis of a sample of stars in the globular cluster NGC 6553. Results of this study, available in a paper published March 12 on the arXiv pre-print server, shed more light on the chemical composition of this cluster.

Globular clusters (GCs) are collections of tightly bound stars orbiting galaxies. Astronomers perceive them as natural laboratories enabling studies on the evolution of stars and galaxies. In particular, globular clusters could help researchers better understand the formation history and evolution of early type galaxies, as the origin of GCs seems to be closely linked to periods of intense star formation.

Located some 19,500 light years away, NGC 6553 is a metal-rich GC in the bulge of the Milky Way galaxy. The cluster is about 13 billion years old and has a mass of approximately 235,000 solar masses. Although several studies of NGC 6553 have been conducted, still little is known about its chemical composition.

A team of astronomers, led by Carolina Montecinos of the University of Concepción, Chile, has now carried out a chemical analysis of NGC 6553 to a sample of over 100 giant stars, investigating the data mainly from the FLAMES/GIRAFFE spectrograph on VLT. The study was complemented by results from VISTA Variables in the Vía Láctea (VVV) survey Data Release 2 (DR2) of ESA’s Gaia satellite.

Moreover, a vertical anticolerration of sodium-oxygen was identified, as there is a spread in sodium, but the variation in oxygen is minimal. Such anticolerration occurs in other clusters of the galactic bulge.

Furthermore, the research did not find an intrinsic variation in the content of alpha and iron-peak elements. The astronomers noted that this is in agreement with the trend of the galactic bulge ﬁeld stars, what suggests a similar origin and evolution.

The mean iron content of the sample of stars in NGC 6553 was found to be at a level of -0.1. However, no signiﬁcant spread in the iron content was detected by the study.

How the habitability of exoplanets is influenced by their rocks