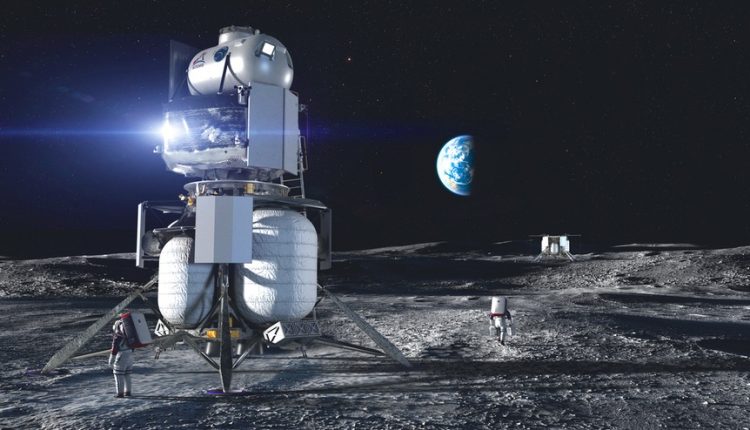 WASHINGTON — Blue Origin filed a protest with the Government Accountability Office April 26 over NASA’s decision to select only SpaceX for its Human Landing System (HLS) program, arguing the agency “moved the goalposts” of the competition.

The company, in a lengthy filing with the GAO, claimed that in addition to not giving companies the opportunity to change their proposals to reflect the agency’s reduced budget for HLS, NASA improperly evaluated aspects of its proposal as well as the one by SpaceX, the company that won the $2.89 billion contract April 16 to develop a crewed lunar lander and perform a demonstration mission.

“NASA has executed a flawed acquisition for the Human Landing System program and moved the goalposts at the last minute,” the company said in a statement provided to SpaceNews about its protest. “In NASA’s own words, it has made a ‘high risk’ selection.”

Blue Origin says in the GAO protest that its “National Team,” which included Draper, Lockheed Martin and Northrop Grumman, bid $5.99 billion for the HLS award, slightly more than double SpaceX’s bid. However, it argues that it was not given the opportunity to revise that bid when NASA concluded that the funding available would not allow it to select two bidders, as originally anticipated. NASA requested $3.3 billion for HLS in its fiscal year 2021 budget proposal but received only $850 million in an omnibus appropriations bill passed in December 2020.

“NASA’s source selection rationale improperly justifies the selection of a lone provider as a result of ‘anticipated future funding for the HLS Program,’” Blue Origin’s protest states. It notes that the combination of its bid and SpaceX’s bid, about $9 billion, is similar to what NASA spent on the commercial crew program, where NASA “made two awards with less available funding and less out-year funding certainty.”

“Blue Origin was plainly prejudiced by the Agency’s failure to communicate this change in requirements,” it states, by not giving the company an opportunity to revise its proposal. “Blue Origin could have and would have taken several actions to revise its proposed approach, reduce its price to more closely align with funding available to the Agency, and/or propose schedule alternatives” if given the opportunity by NASA.

Brent Sherwood, senior vice president of advanced development programs at Blue Origin, said in an affidavit included in the protest that the company received no feedback from the company’s proposal until NASA notified it April 16 that the agency had not selected it for an award.

“If NASA had notified Blue Origin that the Source Selection Official’s assessment of available out-year budget would preclude an award absent a repriced Blue Origin proposal, Blue Origin would have welcomed the opportunity to offer specific adjustments in a revised proposal,” he wrote, such as having the company pay a greater share of the overall development cost.

Blue Origin also criticized NASA’s assessment of Blue Origin’s proposal on several technical and managerial grounds. That includes a claim in the source selection statement that the proposal included advanced payments not allowed in the proposal and thus grounds for ruling the proposal ineligible for an award, and another that raised questions about the communications system for the lander.

The company also argued that NASA “unreasonably favored” SpaceX’s Starship lander in its evaluation. SpaceX, it argued, needs to develop a fully reusable heavy-lift launch vehicle rapidly and use “never-before-tested on-orbit refueling” to be successful. “In contrast, Blue Origin’s proposal is compatible with existing launch vehicles, utilizes only 3 launches, and employs heritage systems that have been flight tested,” it argued.

“The Agency unreasonably favored SpaceX’s evaluation by minimizing significant risks in SpaceX’s design and schedule, while maximizing the same or similar risks in Blue Origin’s proposal,” it concluded. “Such an evaluation is unreasonable and prejudiced Blue Origin.”

Blue Origin argued that, by selecting SpaceX, NASA is jeopardizing the broader commercial space industry. “This single award endangers domestic supply chains for space and negatively impacts jobs across the country, by placing NASA space exploration in the hands of one vertically integrated enterprise that manufactures virtually all its own components and obviates a broad-based nationwide supplier network,” it stated. “Starship is incompatible with other U.S. commercial launch vehicles, further restricting NASA’s alternatives and entrenching SpaceX’s monopolistic control of NASA deep space exploration.”

“Their decision eliminates opportunities for competition, significantly narrows the supply base, and not only delays, but also endangers America’s return to the moon. Because of that, we’ve filed a protest with the GAO,” Blue Origin said in its statement to SpaceNews about its decision to protest the HLS award.

Protests of major NASA contracts are not uncommon. In 2014, Sierra Nevada Corporation protested NASA’s selection of Boeing and SpaceX for commercial crew development awards. The GAO, though, rejected that protest in January 2015.

Blue Origin is no stranger to GAO protests either. It filed a “pre-award” protest of the National Security Space Launch Phase 2 procurement in 2019, arguing that the terms of request for proposals did not allow a full and open competition. The GAO sustained one aspect of that protest, regarding looking at the best value of proposals “when combined,” but rejected other aspects of it. Blue Origin ultimately did not win a launch contract, but did not file a GAO protest.