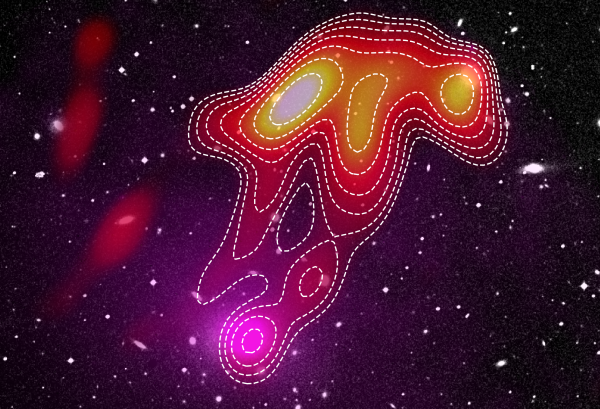 Galaxy clusters are the largest structures in the universe bound together by gravity. They can contain thousands of galaxies, enormous oceans of hot gas, invisible islands of dark matter and — sometimes — the glowing ghost of a jellyfish or two.

In the galaxy cluster Abell 2877, located in the southern sky about 300 million light-years from Earth, astronomers have discovered one such jellyfish. Visible only in a narrow band of radio light, the cosmic jelly is more than 1 million light-years wide and includes a large lobe of supercharged plasma, dripping with tentacles of hot gas.

The structure’s jelly-like appearance is both “ghostly” and “uncanny,” according to the authors of a new paper published March 17 in the Astrophysical Journal. However, even more astonishing than the space jelly’s shape is how quickly the structure vanishes from view, the authors said.

“This radio jellyfish holds a world record of sorts,” lead study author Torrance Hodgson, of the International Centre for Radio Astronomy Research (ICRAR) in Perth, Australia, said in a statement. “Whilst it’s bright at regular FM radio frequencies, at 200 megahertz the emission all but disappears. No other extragalactic emission like this has been observed to disappear anywhere near so rapidly.”

The ghost of jellyfish past

The universe is swimming with energetic structures that are only visible in radio wavelengths, like the mysterious X-shaped galaxies cartwheeling through space, or the twin blobs at the center of the Milky Way. However, no structure this large has ever been observed in such a narrow band of the radio spectrum.

According to the researchers, that likely means this cosmic jellyfish is actually an odd bird known as a “radio phoenix.”

Like the mythical bird that died in flame and rose again from the ashes, a radio phoenix is a cosmic structure that’s born from a high-energy explosion (like a black hole outburst), fades over millions of years as the structure expands and its electrons lose energy, then finally gets reenergized by another cosmic cataclysm (such as the collision of two galaxies).

To create a radio phoenix, that last cosmic event must be powerful enough to send shockwaves surging through the dormant cloud of electrons, causing the cloud to compress and the electrons to spark with energy again. According to the study authors, that could cause a structure like the jellyfish cluster to glow brightly in certain radio wavelengths, but dim rapidly in others.

“Our working theory is that around 2 billion years ago, a handful of supermassive black holes from multiple galaxies spewed out powerful jets of plasma,” Hodgson said.

That plasma’s energy faded over millions of years, until “quite recently, two things happened — the plasma started mixing at the same time as very gentle shock waves passed through the system,” Hodgson said. “This has briefly reignited the plasma, lighting up the jellyfish and its tentacles for us to see.”

The researchers used a computer simulation to show that this explanation is a plausible origin story for that big jellyfish in the sky, though several big questions — such as where the “gentle shockwaves” came from — remain unanswered. The team hopes to take a closer look at the jellyfish in the future, following the completion of the Square Kilometre Array — a network of hundreds of radio telescope antennas planned for construction in the Australian Outback.

How much forest did we lose in 2020? Like, a Netherlands’ worth

Why the internet fell for the ‘Voltswagen’ April Fools’ joke